Congress will reconvene at the end of January, and with a long roster of supporters on both sides of the aisle, SOPA/PIPA could actually pass. The likelihood is so great that technology giants including Google, Amazon, Facebook and Twitter have gone so far as to publicly consider a simultaneous blackout in protest.

Perhaps that's necessary for people to realize the gravity of the situation.
Top

You know I find I have little love for the person who can criticize a hamster.

I think it's totally necessary. In one of my high school classes there's one kid who's a programmer, and Reddit browser, and he knows all about SOPA. I found out I think initially from Phillip deFranco, but I see threads on Reddit about it every day as well. I personally know no one else who is aware of it. It's getting pathetic coverage, just like the NDAA, although that's already passed.
Top

Whats NDAA? (this isn't just to prove your point)
Top

That would be the law that allows the U.S. govt to detain anyone they want to, even US citizens arrested on US soil, for any reason they say is a good one, for as long as they want to without a trial, access to a lawyer, or any other due process.

Fabricated by our fearless legislators, and quietly signed into law at the start of this year by our, um, fearless President. (He said he had serious reservations, but not serious enough to not sign it, obviously. Thanks for standing up for our constitution, B.)

Eat That Shit, "Democracy" and "Rule of Law".

Merry Christmas, America. The innocent have nothing to fear.
Top

If I may clarify some of the details, the NDAA is actually a much broader bill, passed every year, that "authorizes $662 billion in funding, among other things 'for the defense of the United States and its interests abroad.' In a signing statement, President Obama described the Act as addressing national security programs, Department of Defense health care costs, counter-terrorism within the U.S. and abroad, and military modernization. The Act also imposes new economic sanctions against Iran (section 1045), commissions reviews of the military capabilities of countries such as Iran, China, and Russia, and refocuses the strategic goals of NATO towards energy security." Basically, it's a vital bill that is passed every year that provides the military's budget, and included in that budget is health care for soldiers and families of soldiers. That's why it's so tricky. The section on counter-terrorism includes "Indefinite detention without trial," this new cool thing where any suspected terrorist can be detained indefinitely without trial until the end of hostilities. I.e the war on terror. Which, theoretically, will never end as long as the emotion of "terror" exists. The kicker in this suspected terrorism bit is that the government's current list of criteria for a terrorist suspect includes such gems as "those with guns, those with missing fingers on their hands, those with more than 7 days' worth of food in their house." Basically, anyone. And you don't have to do anything, just be a "suspect." Obama straight away threatened to veto because of this section, but ultimately, he was forced to because there were lots of important things in there, and any amendments were immediately shot down by all but 7 of our lovely representatives. Lets all hold a moment of silence for our 6th amendment, may it rest in peace.
Top

This is why they need to stop making huge fucking bills where everything is packed together. One party or another always tries to tack on amendments to either get something out of the deal or swing the vote in their favor.


Korban3 wrote:Well, even if the President vetoes SOPA and others like it, it can still become law if Congress can get a massive majority re-vote. It just pisses me off that SO many people oppose it and our government is trying to go through with it. What the fuck happened to representation? I didn't tell any senators to support this shit, so why are they? It's bullshit how much the represent their own wallets and personal interests over the people who's lives they're fucking over. I hate this countries government, and bi-partisan politics can kiss my ass. All it does it screw the citizens over because the two (or more) parties are too busy bickering and bitching about each other to actually put forth effort to help anyone...

In america, SOPA hasn't even made the news. The media controls the news and are the ones trying to force this bill through. So a vast majority of people are simply unaware of what SOPA is.

A lot of sites are shutting down in protest, congressmen have been emailed, etc.

But these congress people are fairly isolated in terms of understanding the bill they're passing. All the information they are getting is from media lobbyists for SOPA. More recently, there has been some protest against it.

People kinda want Google to protest by shutting down for a day. one day is all that would be needed from them and they would instantly make everyone in the US aware, the news networks could no longer cover it up and would look like total assholes, and everyone would be really pissed off. However, Google has a pretty strictly "hands-off" policy when it comes to politics and client manipulation. Their site reflects this policy perfectly (no ads on the front page and a simple design).
Top

Well Google and a slew of other companies are considering a coordinated blackout on January 23rd, the day before Congress reconvenes on the subject. I don't care how "hands off" Google is on politics; they can't stay out of this one. There is way too much at stake.
Top

Holy shit, SOPA hasn't made headlines here? Like not once? What the fuck.
I don't watch the news, it's depressing as all get out, so I guess I wouldn't know. I really do hope Google and the gang blackout for the 23rd.
So, anyone still up for that whole armed rebellion thing? If you're foreign and can't get guns, then don't worry. It's really easy to get them here. Just hit up a local pawn shop: there's always someone been down on their luck and lost their gun(s) to a pawnbroker.
Top

Hold up, hold up, EVEN US citizens? That's messed up man, the law EVEN allows them to arrest the only people they should be allowed to arrest.
Top

Calm Ren, calm, we all saw that, but we decided to let it slide

. Also SOPA hasn't really made the news out here either, I only know about it because of the internet, and the story is pretty much the same for everyone else I know who knows about it.
Top

Hold up, hold up, EVEN US citizens? That's messed up man, the law EVEN allows them to arrest the only people they should be allowed to arrest.

Haha yeah...not exactly. The key phrase is indefinite detention, which is constitutionally prohibited for US citizens, but used until the end of hostilities for prisoners of war, probably as outlined by some convention made after a world war (Geneva maybe?). A US citizen can be a suspected terrorist though, and because we are "at war" with "terror," a "suspected terrorist" is a prisoner of "war." What qualifies a suspected terrorist? "...those with guns, those with missing fingers on their hands, those with more than 7 days' worth of food in their house..."
So yeah.
Top

Hold up, hold up, EVEN US citizens? That's messed up man, the law EVEN allows them to arrest the only people they should be allowed to arrest.

lolz, that's right, my foreign friend, now we're under the same, uhm... "laws" we've been subjecting all the rest the world to for the last 10 years. So of course we're whining...

Otoh, lots o' people here deplore doing it to anyone, no matter where they're from, and of course it violates a ton of international agreements, Geneva Conventions on treatment of p.o.w.'s, reasonable human behavior and morals, etc. But it's a tough and murky and complex thing to enforce international law, as you might guess, and the military has been able to get away with some outrageous crap that is basically illegal here, just by making it way hard to fight. Check out the very picture on the NDAA wiki page: it's Guantanomo, with prisoners from the war zones. A fairly large number have been sprung, but the process is a real bitch, and takes years.

Now here in the states, law is-- or has been, up 'til now, a lot more straight forward. You (supposedly) have to have lawyers, trials, evidence, defense and convictions to throw someone in jail, and you don't get to just do it for "indefinitely", there are sentencing guidelines, appeals, all that civilized stuff. It ain't always perfect, but to make a law that throws it all out is pretty bad-- and won't make it one day easier to do anything about the abuse of p.o.w.'s and foreign nationals, that's for sure. The whole thing is a steaming pile from the start 10 years ago, (and likely earlier), but now it's our country's fucking LAW that we're going to do it.

Oh, Merry Christmas to the rest of the world, too.

I'm going to stock up on guns and food and rockband guitars and a sweet eyebrow.

And a man-kini thong thing. And some more body hair.
Top

Sounds like someone needs a friend to bring the whipped cream.
Top 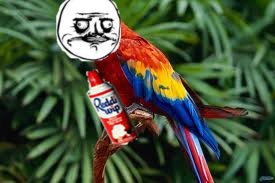 Wait... He's got what covered? You know what, I do want to know.
Top
Post Reply
71 posts