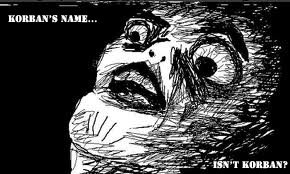 That made me laugh. A lot.
Top

Seriously though, with such a straightforward username like "Korban3," I just assumed that was your name. Where did Korban3 come from?
Top

I needed to come up with a username for Runescape. So I picked a letter and thought of a way that no one else would be using it. It would be a cool name though. Actually I lied to all my friends at school once and told them I had legally changed my name to Turok McCloud the night before over the internet. All but one fell for it. It was funny.
Top

No one would ever believe me about that, I cry wolf too often.

Is this Dark Nocturne? If it is, I like the new name better.
Top

Yeah, it is the same project. I just have a more solid idea for just about everything in it now, so a more fitting name was in order. No spoilers on anything yet though. And good news! The missing foot in the sprite. I've almost got it down right. I hate doing pixel art so bad m_m
Top

You should ask for help if you want it, although it seemed fine to me.
Top

I don't need help! I'm like Arnold near the climax of Predator or like Rambo. I'm a one man design beast. But if someone wants to help I guess they can

I just have to grind through them, and I'll get better over time.
Top

Yup, although time will get better over you. You live in Soviet Russia, right?
Top

Wow, I'm really stumped on this one. I'm writing my animation system right now, and it's almost done. Problem is, I got an issue with new instances of a class being written to the same memory address. It's because they are being written in a for loop, but the call to the constructor is being reached multiple times, as intended. But each time it is reached, the new instance takes the same address as the last time the call was used. Hopefully, I'll have this problem resolved within a few days and can get this new sprite sheet done. After that, I can add more sprites for animating.

Here's some simplified almost-pseudo code if someone can figure it out. The part that causes issues is the beginning of the Animation constructor function where Frame::Frame() is called. It's right in a for loop. This is a really difficult error to find outside of a compiler, I barely found it by using a break point at every line and checking pointer address and crap after each line was run.

Now that that is done and my Animations are indexing and linking entirely properly, as far as I can tell, I should have it usable before the night is over.
Top
Post Reply
113 posts