And the fact that the R in randomness isn't capitalized.

rodeje25 wrote:I'm starting to wonder how people will react when someone approves spam in this thread accidentally

by rodeje25
well that didn't last long...
and it came with a side effect: the wolfire forums responds extremely slow and my request time-out all the time...

by Endoperez
Zoe Quinn became the target of a harassment campaign that started from her ex'sangry blog post... a year ago. It was still called the Quinnspiracy until 27th or so. She wrote a blog post where she mentioned she'd rather be know for what she's done since, instead of all that happened to her. Since I keep mentioning her in the GG context, I thought it'd be fair to mention what she's been up to:

She's doing Crash Override Network, an internet antibullying, anti-harassment thing that you can contact for help or advice if you need it.
She also made http://www.sortingh.at and http://www.gamesareforeveryone.com/ , two simple sites that help people get started in game dev.

Endoperez wrote:Zoe Quinn became the target of a harassment campaign

This isn't even worth entertaining now.

by Endoperez
I've been looking at stories of evil overlords lately.

Then there's Overlord, the anime. Protagonist is hilariously OP and his powers are all evil-themed, but his goals are so far benevolent. "Protagonist is an OP undead the anime".

There's also a manga and light novel called Re:Monster, but it's bad.
Scene 1: SciFi world, protagonist dies. Scene 2: protagonist is now a goblin in fantasyland, forget scene 1. Also he can eat anything to get powers. Scene 3-infinity: " i killed a thing and ate it. I am more powerful. My goblins are more powerful. Also look here's some wominz."
It's told in a bland way, there's no tension, no proper world building. Then it's raining women who all have sex with the protagonist. I mean, in Overlord the anime the first action of a guy-turned-undead is to grope a woman, and it's the pillar of tastefulness compared to this. I've read fan fiction where the hero gets op powers and all the women that's better than this story that has been published on multiple different media.


As far as books go, if you have even a passing interest in Star Wars, the books about Bane, a Sith, may be of interest. The trilogy starts with Path of Destruction. He's a cruel, big, strong man in a crappy situation. The books take place hundreds of years before the movies, when both Jedi and Sith have whole armies and are fighting for the control of the galaxy. It takes weird ideas from the movies like there only being two Sith but hundreds of Jedi, and makes them work. The characters are interesting. Bane is evil, in that he will do anything to further his goals - which means he will not do evil if it opposes his goals. Still a murdering bastard. 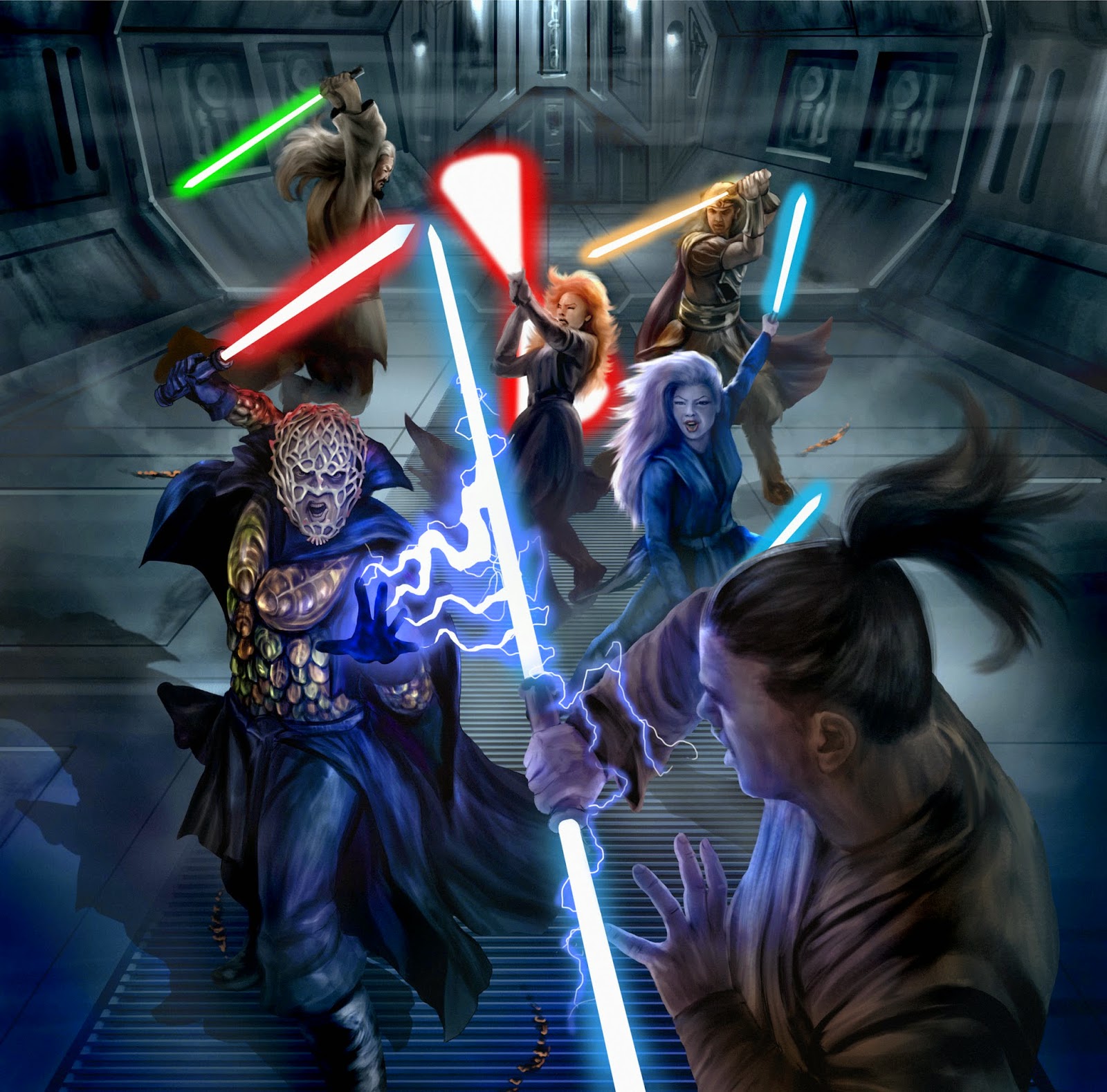 Further on the literary side of evil, we get to comic book -esque novels.

Soon I Will Be Invincible is a fun book. The protagonist is an evil mad scientist. His mental illness is that he's a supervillain. He knows it's not his best option, but he will still try to build a death machine to take over the world. If he's caught by the heroes and panicking, he'll barely pay attention to the quips and evil monologue coming out of his mouth. He can't kill until he has finished gloating, etc. Has one of the most amusing viewpoint switches I've read, showcasing a fight from both sides. Confessions of a D-List Supervillain was a bit amateurish story, but enjoyable on the whole. Basically, the protagonist worked for the book's Iron Man expy, got angry, turned to crime... and some years later mind control bugs got everyone not wearing a suit of full-body armor. Oh and of course his love interest is literally a love goddess. But since only one goddess wants to jump his bones I guess it's more or less par for the course.

Then there's Worm the web novel. Oh boy. Superheroes, psychological trauma, clever powers, insane twists and turns... Supervillains and heroes battle. Villains are allowed to exist because there's these three unstoppable monsters that need to be slowed down so people can evacuate. And by unstoppable, I mean Japan is short an island or two. "Then it got worse, the story".

There's some on my list I've not gotten around to, yet, like Villains by Necessity, and maybe Elantris.
There's some which are about people pretending to be evil, but not. Dark Lord of Derkholm is one of those.
Thief stories aren't really what I'm looking for now. They are about the underdogs, mostly, and I'm on an evil three-headed top dog spree ATM.

Sorry about the rant. Thought Randomness could use some stuff it hasn't seen before.

Endoperez wrote:I've been looking at stories of evil overlords lately.

I played Overlord 2 on Steam for five minutes, it has not aged well in the design department.

Still kinda pretty though, I would probably enjoy it if I took the time to play the levels.

Has anyone here played Sub Rosa? I'm looking into buying it and I wanna know if it's worth it right now.

by Thomason1005
yeah ive got subrosa, havent played it in a while though i think theres more stuff now

but you really need to take time for it, you cant just hop in for 5 mins which is why i didnt play it very much

it has some really interesting stuff on the technology side and a nice feeling when walking and aiming. and also when dying because you need someone else to heal you with a bandage. the car physics are completely basic though. and you have to manage a lot like your money, weapons, magazines, the deals, the money in the suitcases which all isnt explained at all. and you depend completely on your team
it isnt that expensive though so i guess its propably worth it.
& idk how empty the servers are currently...

Phoenixwarrior141 wrote:I played Overlord 2 on Steam for five minutes, it has not aged well in the design department.

What on the designs hasn't aged well? I'm not sure if you mean it's just bad, or if the standards have improved so much that what used to be decent is not bad in comparison.

I've been playing the first Overlord, and I wouldn't have said that it's aged... rather, it has bad controls. Have game controls (& other game design decisions) have improved so much across the board that being bad in the old way really is "aged", and different from just bad?

Endoperez wrote: What on the designs hasn't aged well? I'm not sure if you mean it's just bad, or if the standards have improved so much that what used to be decent is not bad in comparison.

It seems like level design hasn't aged well, maybe it's just my modern gaming palette though.


I've been playing the first Overlord, and I wouldn't have said that it's aged... rather, it has bad controls. Have game controls (& other game design decisions) have improved so much across the board that being bad in the old way really is "aged", and different from just bad?

I think "aged" has come to mean that things that used to be good, but as things have changed over time they have failed to keep up. Not necessarily bad, just not good "anymore".

by Endoperez
What the heck, I may as well use Randomness as my own personal blog to write whatever. I just finished a short manga of 20 chapters that was basically Western Superheroes / Anime Heroes crossover. Bug-themed superhero, magical girls and a sentai team battling it out together against generic anime villains with crazy pseudo-smart evil anime scientist plot.

by rodeje25
[quote="Endoperez" I mean, imagine if Game of Thrones had showed 5 seconds of a happy puppy excitedly playing in snow after every death scene..[/quote]
I would watch game of throns if they did that... But i'm waiting for october

by rodeje25
We're all gonna die! Kanye west wants to become president in 2020

and he said some very stupid things like "Rap is the new Rock and i'm te best rockstar that ever lived" and he kept cutting of other celebs and Some more stuff i would have to look up. That's why it's gonna be worse than trump...
All times are UTC-05:00
Page 523 of 542
Powered by phpBB® Forum Software © phpBB Limited
https://www.phpbb.com/