Anything else
Locked
93 posts

Also, don't inject it yourself. That'd be stupid.
Top

Also, don't inject it yourself. That'd be stupid.

I'm going to get one.
Top

Damnit, i was dormant too long and now making counterarguments would be irrelevant to the current conversation...oh well
Top

Vespabros wrote:Damnit, i was dormant too long and now making counterarguments would be irrelevant to the current conversation...oh well

The uses for that seem rather limited at this point. Not sure I'd get an implant just for NRC as it stands. Just a little more oomf and capabilities and I'm down though.

Korban3 wrote:The uses for that seem rather limited at this point. Not sure I'd get an implant just for NRC as it stands. Just a little more oomf and capabilities and I'm down though.

en.m.wikipedia.org/wiki/Projection_keyboard
That and Google Glass lookalike are probably as good as you can get for years.

However, what could you do with a graft you can't do with a smartphone? Srriously, we're Jetsons sans flying.
Top

Grafting such a thing on your arm does sound cool… but I'd hate for it to get snagged on anything. Can't imagine that to be a pleasant sensation, no matter how brief the pressure.
Top

Couldn't do a lot with a Raspberry Pi graft.
Except, you know, everything the Pi can do.

I guess anything with a mouse would be hard, but you'd be able to process things as a touch screen I guess.

Also, those laser keyboards are neato. Not sure how practical, and I do like the feeling of the keys actually moving, but they're an interesting concept.
Top

It wasn't as bad as the other one. I actually was able to watch it!


According to IA, games journalism first tried silence and pretending to ignore this thing. Then they tried censorship. Now the sites are using mockery and attacking the people who keep saying these things.

However, he says, this won't go away because it's important. How does he know? People keep talking about it. "You are lucky if you can keep internet's attention for a day" but this has been going on for two weeks.

Well, does this mean that anything that gets internet attention for a long time is important and relevant? For example, if feminists were to keep saying the same thing about, I dunno, gamers - would that mean it's important, since they don't forget it in a day?


Then he goes on about arrogance. He explains how the journalists are arrogant, for example, this Tassi guy thinks the people critical of quinn are like people critisizing obama for being a muslim (when he's not).
He then blames Tassi for not investigating something that happened in real life years ago, but instead reading through information written about by people who have been doing it for a week already. Seriously, what did he expect? Journalists don't get amazing time-travel powers!

What Tassi actually said was:

"I've done the research...
...And while a deeper look at the nature of the media-industry relationship is warranted, this affair only serves as a leaping off point, not as the story itself. "

What I get from that: Tassi doesn't think harassing a woman will help games journalism, but he thinks there is a story to be written about this. Why hasn't he written one? Maybe he'd like to investigate the thing first - like IA tells him to do.

quinn is to this like nixon was to watergate, you can't discuss this corruption without discussing quinn, blablabla. Nixon was in charge. Quinn wasn't. If anyone is the Nixon of Gamergate, shouldn't it be the boss of Kotaku, who either doesn't know what his journalists are doing, or is covering for them?

"I'm looking into these SJW, they seem to be for equality"
-> journalist looks into new concept

"divinity original sin is best game of the summer. what's yours?"
-> journalist likes a game

"save the boob plate" article written by a guy on the divinity original sin team
-> an artist who worked on the game the journalists likes doesn't like a specific thing some people who belong to a group the journalist looked into!

Why haven't we asked Aubrey what he thinks about this? I mean, everyone here likes Overgrowth, which means Aubrey's opinion on this conspiracy thing must be more important than what we have come up, on our own. I mean, once Aubrey imparts his artistic wisdom on us, we will see the light, and agree on everything, and we will... yeah, right.

Leigh Alexander made a twitter message that mentioned "wound up nerds", but the actual thing people are up in arms about was this article:
http://www.gamasutra.com/view/news/2244 ... e_over.php

Being rude to their audience likes that makes them pretend-journalists, because journalists aren't allowed to do that.

I wonder if they explain why?


I hope you’ll stay. I hope you’ll be part of a glorious future where a game that treats women and LGBT groups with respect won’t be held up as some weird oddity to praise and encourage. A future where female gamers don’t have to disguise their voice on raid chat, where game developers won’t be threatened with rape. Where people won’t be asking for a “gay filter” on their games because homosexuality makes them uncomfortable. I hope you’ll stick around for that.

Ah. He wants a future where... well, games have the budget to include both genders, I guess.

Kotaku is smoothing over rough edges: Patricia Hernandez sent twitter messages says she dated the creator of a game who she has mentioned, + did it again with Anna something. Yes, that really looks like KOTAKU's journalists didn't follow what was stated to be the official policy.

Was thie chief really unaware about all of this? I dunno. Kotaku seems to have made several mistakes. IA has a point. I hope Kotaku can handle this better in the future.

-----
"omg we exploded their site" twitter messages between Zoe Quinn and a someone.

Yeah, I've read that twitter chain before, they were surprised about it and it wasn't planned. Any way, IA wasn't really claiming that - he was drawing connections.

Connections from Zoe Quinn to Silverstring Media.
From Silverstring to Anita Sarkeesian.
Then from Anita to Devin Faraci, who seems to be kind of a stupid guy since he's making comparisons to ISIS terrorists. It's not that bad! These guys after Zoe Quinn haven't killed anyone, just published rape and death threats and driven people from their homes.

That's four connections. Hasn't it been said that 7 connections can connect to you to almost anyone in the world? I wonder, could Internet Aristocrat's video be connected to someone making rape threats in fewer than four connections? I could read the video's comment section, but that'd be cheating.

All the journalists are involved in a conspiracy that rules them all, because they respond to this thing that has been going on and on. Didn't IA himself say that the journalists can't ignore it if it keeps going on? It did keep going on. Then the journalists responded. How did they respond? In pretty much the same way they had responded earlier - "this isn't newsworthy", "I won't name any names but an innocent woman is being harassed" etc.

Maybe it's because they think that's all it is?

Oh, that thing. I've actually read it. This guy made Cards Against Humanity. The thing he apologized for happened ten years earlier, when they were in college, when they were datting awkwardly and then broke up awkwardly. According to him they never had sex. She has never confronted him about this, but mentioned it recently on her Facebook.


There is no evidence for this story. I will never have a chance to defend myself. The structure of the modern internet is such that these things never reach resolution and never go away. This is just baseless gossip that will now haunt me for the rest of my life.

How true it is. It lives on.

"this is important because forums and sites mention it"

He keeps coming back to this.
Well, there are those people who keep speaking against boob plates and chain mail bikinis. Does that mean that they're right and artists should comply?
Obviously not.
Top

The latter can have a more negative impact on me, so that is where my position stands on this situation. Who cares about the developer, I just want to know if I can trust when one of these news sites tell me something is good.

Sad thing, is there is more money in tabloids and controversy than quality news and reviews. Remember that, when you consume a piece of media designed to get you angry. The real winners are the news agencies.
Top

Pewdiepie has censored the internet. That is, disabled comments.

I wonder if it's bad when it's not a feminist doing it?
Top

Endoperez wrote:Pewdiepie has censored the internet. That is, disabled comments.

I wonder if it's bad when it's not a feminist doing it?

Still bad, but Pewds gets enough hate so that makes sense.
Top

A very good article written by an actual journalist who worries about the integrity of games journalism. He isn't worried about journalists writing about games made by friends, or friends' friends.
Top

@TheQuinnspiracy wrote: I guess it's a good time to mention that I've been lurking in & recording 4chan's raid IRC channels for a few weeks 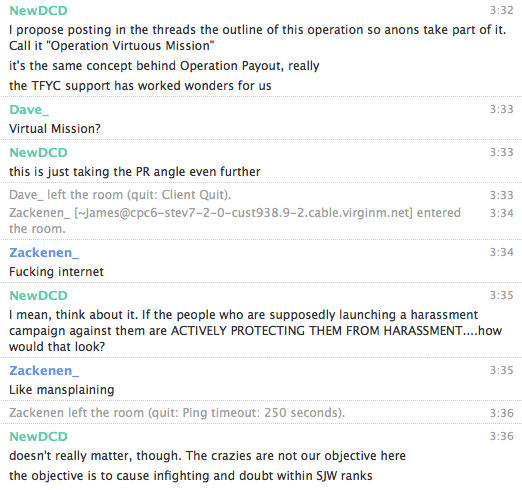 That's super cool! It looks like Anon can't even trust Anon any more.

According to those screencaps, #GamerGate tag was at least partly orchestrated by fake accounts. 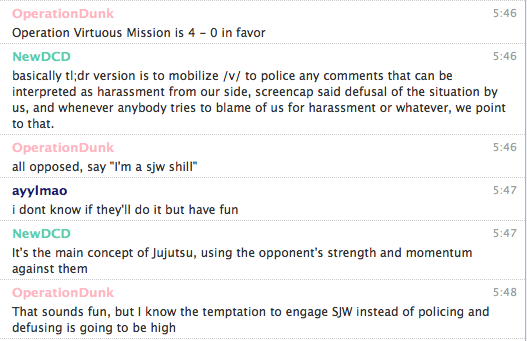 Nothing 100% damning there, but there were a few very dubious ones such as a reminder that all BLACKHAT = malicious hacking talk should be done in PMs.
Top
Locked
93 posts