I was really hoping for a The Riddler comeback, mostly because I tend to love the works of Jim Carrey. But since Jim most likely will not be the one casting Riddler, I think it would be a failure.
Top

Obviously it cant be the Joker for multiple reasons, and I agree with *Edit Whewhpsy*FRESHBITE that if you cant get Jim Carrey do not cast the Riddler. Me am make think Two face or crock ock
Last edited by Ebrahim on Sat Apr 17, 2010 4:49 am, edited 1 time in total.
Top

i was reading about it not too long ago, and they said that if they do have the riddler, it will be Jim Carrey. but other sites have said that the next film will see the Joker and Harley taking on our husky voiced hero.

there is, of course the chance that they will make like marvel did for spiderman 3, and have the riddler, the joker and harley take him on. of course that could be awkward, what with heath ledger being dead and all, but it would still be cool. another thing that i have read is that the joker will be in the third film, but he will be played by Johnny Depp. of course at this stage everything is still speculation, i dont think they have even announced a third film so fire away.
Top

Am i the only one to think of the penguin? he's so awesome.
Top

I dislike the penguin for the simple fact he bit some poor geezers nose off, yuck.

Anywhoop I never thought of Johnny Depp and I think he could bring some amazing acting into the third movie.
Top

I believe they've said that the penguin was one of the unrealistic villains they won't do, but then they did Ra's Al Ghul already and changed his backstory to make sense, so they could easily redesign him. Wasn't he raised by penguins or something? I forget.

Personally I'd like Scarecrow to return again. Apparently they're planning this one to be the last of the Dark Knight saga, so I'd love for him to show up as a serious threat again.
Top

Johnny Depp might just work as a Heath stand-in, one more time.
Top

Not sure about Freeze making an appearance. He's a cool villain, (pun not intended) but he wouldn't really fit in the Dark Knight universe, the cryostasis backstory wouldn't be believable.
Top

And we don't need this again: 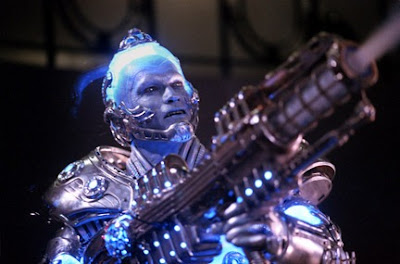 ----
I am opposed to another Batman movie, I am lacking the fan-heart. I look forward to a Superman movie. And the combat is begging to be thrown to someone who doesn't make a kryptonite island. In other words: Lose Lex Luthor.
Top

i agree with invertin, freeze might not make much sense at the moment.

am i the only one who thinks that she has weird eyes, a strange nose, and is just generally not very attractive?
Top

No, no your not. She resembles the alien in your avatar. Anyways I would think Bane might be a good badguy, or maybe killer crock. I'm really not in love with Jim Carrey, and I personally didn't like him as the riddler in other movies, however the riddler would also make a good villain.
Top

yeah, i was thinking about kiler croc, but i didnt wanna say it for fear of invertin killing me.


EDIT: And yes, I would like to see Killer Croc, too.
Top

I dunno, it seems the latest "Dark Knight" series has been using a much more darker villans

Am I the only one who loved Jim Carrey as the Riddler?

I found him truly terrifying when I first watched it (granted, I was about 8 ), but still, I think he'd be great even if they wanted a darker film, I mean, have you seen him in "The Number 23" and "The Truman Show"... I think he's pretty suited to dramatic roles IMHO
Top
Post Reply
39 posts