My question is: Will Overgrowth have a character customization?
If yes, will be like GTA IV( just the clothes and acessories) or like TES IV(total customizable)?

I'm sure that some level of character customization will be involved with Overgrowth, at least for the multiplayer aspect that they've mentioned. Can you imagine how dull it would be for all of your team-mates to look exactly like you?

A character selection simply isn't enough variety for most people, but if they incorporate this aspect into the final product, I really hope that they do it correctly.
For instance, you don't want to be too simplistic, or too stingy with unlockables (GTA, Modern Warfare 2, Halo: Reach...), but at the same time, you don't want to have a system that provides entirely too many options. If you do, then you'll need to provide a way to do light customization, with optional stuff.

For a game like this:
Size
Fur Color
Eye Color
Base Face/Head Shape
Base Outfits

Then, give the player plenty of options to customize all of the little aspects that make those up, or the choice to simply save and get into the game with their new look.

Not sure if the Overgrowth team will look at this, and if they do, these are probably already things that they know. They seem to be doing an extremely good job with attention to detail and to what the community wants. This idea seems to be bouncing around a lot, so I'm 99% certain that it'll end up in the game.
Top

If this game were to be anyway like GTA IV as far as free roam, main quest/side quest, huge map, any form of customization, I would pay $300 easily to play this game, and $700 to play this on my consoles.
Top

Some art asset posts and a few times mentioned elsewhere indicate that OG will be like Lugaru in level structure, but with a some major decisions in the story that change the path. As for character custimization, I know that a modular clothing and gear system was a goal, and has had a few examples made a while back. I'm sure that, even at this stage, someone could get a custom character into the engine quickly. Haven't preordered yet, so I can't speak for the SPF, but I've heard that it'd be relatively easy. So when I preorder, I'm making Chuck Norris, John with his beard, and a fox, if not in that particular order.
Turner is the main character though, so I don't think that we'll be able to change his fur color, and bodily aesthetics for the normal game, but for multiplayer, it'd certainly be a nifty feature.
Top

people keep dangling this multiplayer word around, has that been confirmed?
Top

Bril wrote:people keep dangling this multiplayer word around, has that been confirmed?

It's in the plans, but the devs have said that it's not as high in priority as single-player, basic combat mechanics and other such stuff. So if they have to drop something, multiplayer is relatively high on that list. IIRC co-op is more likely than versus mode(s).
Top

Multiplayer would be cool
Top

Yes, and win and awesome. But Endoperez put it best as it could: It's low on priorities now, and if something gets cut, that'll probably be it. I wish I could say that nothing EVER gets cut in game development, but a lot of the times, someones favorite thing might get cut. I know that in Half-Life 2, there were more weapons that were cut early on. Jst the nature of the business, although without a deadline, they might have a better chance of keeping planned features. We'll see, only time will tell.
Top

suggest﻿ custom voice option Via mic or wav file, with anti ear rape via loudness Limit, as well as preset voices for customizable characters (if there are any) but even then multi-player may have microphone support, but for people who dont thats where the wav file comes in, like movie or other game voices. and for customization i think soul calibur 4 did it right, this dosnt need to happen now, just giving you an idea.
Top

This game would be better if the player able to make an own character in the game. The change of dresses, colours ...In my opinion this game should use more color in the end. 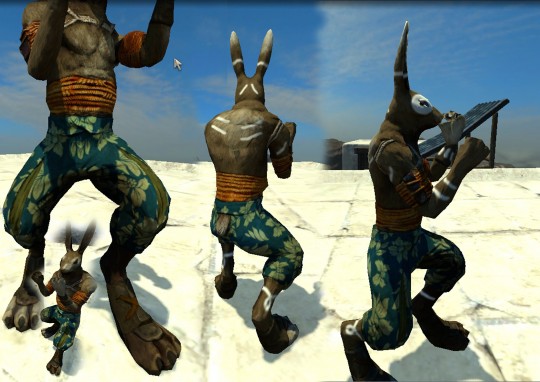 Well, it doesn't looks as good as that one because I'm not great at texturing, and haven't put a lot of effort into it makeing a good placeholder yet, but how about this? Custom model, but I haven't been able to get the characer .xml to work yet. I get that silly "Abort Load: Generic type not recognized"' error everytime I try to spawn it. But here it is until it's working and I make a better (and clothed) texture... 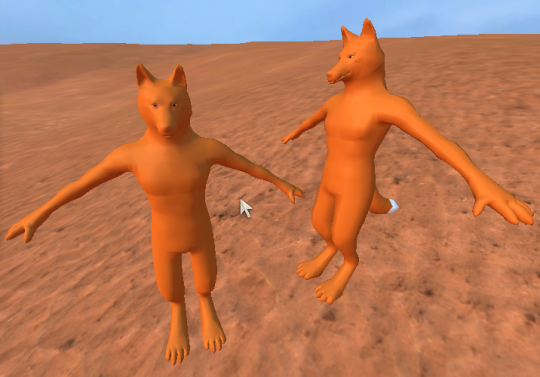 Haha, texturing is my bane as well! I made a turtle character way back, like a year ago, but never got anywhere with it because I suck at texturing.

Good job, hope you can get it working properly.
Top

If you're good at sculpting, you can add detail to it and use the baked AO map as a starting point for your texture, especially if you have a good fur sculpting brush.
Top

Thanks Endoperez, and Blender 2.46 didn't work with the io_phxbn scripts. I got desperate and sent a color coded, and otherwise confusing email with diagram to the wolfire contact, hoping to get some help with those import/exports. So that's one way you can make textures line up at the seams? Never could figure that out. I could use that high-res detial object to bake a nice normal map, too. Thanks for the tip, johndh. Now to figure out how to do that stuff in Blender...hm.... Man I feel clueless sometimes.

Texturing isn't one of my strengths, but I've been practicing it this summer a bit. Way too little, though.

In Blender, duplicate the object you want to work on. After this, it's better to move the duplicate to a new layer since it will end up slowing your computer most probably.
After that, check that the duplicate's quads are mostly even. If you're making e.g. a spear in which the quads of the shaft can very tall compared to their width, you can Loop-Cut (mesh - edges - loop cut, or ctrl+r) and then use the mouse wheel to increase the amount of cuts until the quads are mostly square. This should NOT change the form! You're just adding cuts so that when the object is subdivided, the subdivisions will be even and you can draw scratches and other detail in all directions with even results. There should be no visible different (in Object mode) between the original and the edited duplicate.
After that your base mesh is ready for sculpting, so sculpt in the detail you want. I'm new to it so I won't say any more about that.
Then comes the baking. I choose the duplicate, sculpted object first, then add the original to the selection. I open Baking menu (on the rendering submenu on the buttons window), choose what map to bake (so far I've used 'normals - Object space', and 'ambient occlusion' bakes), and change the settings until it works. I made a new window setup based on UV editing; it shows the Bake menu, 3D view and UV Image view, and it's the easiest way to see how your chosen settings work. You might have to enable to change the "object to selected" or "bias" options.
If you're baking AO, be sure to go to the World tab, and change the Ambient Occlusion settings. I think it was Black Stormy who told me about that.


After that you have the baked maps. I've used the Ambient Occlusion as a base for painting the texture. I usually keep it on top layer of Photoshop, on Multiply, and draw on the layers below that. Making seamless textures is doable on rectangular areas (there's dozens of guides for seamless or tiling surfaces, the trick is to use the Offset filter (Filters - Other - Offset in Photoshop) or similar), but I don't know any easy way to do it on complex or rounded shapes without using 3D painting. 3D painting requires a program that shows the 3D model, and lets you draw the brush over the 3D model, and then uses that to paint the 2D image. Photoshop CS X Extended, Mudbox, Bodypaint, 3D Coat etc are all commercial programs that can do that. I don't know what's the best at it, or what would be the cheapest alternative.
Top
Post Reply
16 posts