It's not hard to imagine Lugaru without them, as there were only 3 and they died within about the first 10 minutes

But yeah, it's the way a lot of games and movies portray female characters that causes it I think. Movies have a female hero and they just drop her into skimpy leather tights or a tight-but-too-small deerskin if it's a medieval setting. Pisses me off, but there's not a lot to be done about it. 'Cept play Overgrowth.
Top

Well, even Turner is now in a tight pants HAHAHA. It is true that female characters had no gameplay significance, but they were important for the story.
Top

Yes, they were important, though. They were the entire motivation behind the story, so without them it feels to me like Lugaru would have felt too... arcadey.
Ya know? Like DOOM. You had no real motivation other than the urge to shoot shit to go and shoot shit. DOOM was great, but it had no story. Not that it needed it. But it helps some games with motivation behind action.
Top

Korban3 wrote:Yes, they were important, though. They were the entire motivation behind the story, so without them it feels to me like Lugaru would have felt too... arcadey.
Ya know? Like DOOM. You had no real motivation other than the urge to shoot shit to go and shoot shit. DOOM was great, but it had no story. Not that it needed it. But it helps some games with motivation behind action.

You don't need a story when you can kill stuff with a shotgun, putting blood everywhere.
Top

Precisely. John Carmack was quite the genius.
Top

lol eirlier i was thinking about this.

In regards to the breast issue, I think something important to note about the anthropomorphic animals is that they're, you know, anthropomorphic. Point being that while we put a lot of focus on the animal aspects, they're physically just as human. Putting breasts on an anthropomorphic rabbit is really no sillier than giving them opposable thumbs when you get down to it. If they were birds or reptiles or something, it might take us to this weird place where it gets fuzzy because you're putting mammaries on non-mammals, but we don't have that problem in Overgrowth.

So I don't see any problem with adding them, since it's a secondary sexual characteristic that's easily identifiable to humans. And most of our playerbase is human. As long as it's done tastefully, I think it would work okay, and I have no reason to believe Wolfire wouldn't. It's not a must, there's other ways to go about differentiating the genders, and it couldn't be the only characteristic to be changed, but I don't think it should be ruled out simply because the animals being anthropmorphosized (is that a word?) dont' have them.
Top

Anthro animals in Overgrowth are still pretty much animals ...

They still have their legs bending in the right way, rabbits have the same souless eyes they have IRL, they make strange noises when they fight/die and in Lugaru, when they speak.

It's really not like furries, for instance, who basically ... draw/enjoy/dress as/think they are very human like animals (Limbs are all human like - with hair on it, the head is an animal head but they can show emotions, smile, etc, and their eyes are ... "human")

In the alpha, they really give the impression of wild animals, who fight for no reason and aren't civilized.
Top

I believe that feeling of fighting just because comes about because the game has no motivators. Presumably, Turner's family has been dead for years so even that feels to be a weak motivator. The enemies just try to kill to just kill you. Once a story has been added and there is some reason behind all that, it might feel a little more civilized, although still violent.
Top

Still, even in Lugaru, the fights were pretty much like ...
"I gotta feed my family so I'll kill you."
"NO U - so plz dont attack me"

Still a far more comprehensible story than most fighters/brawlers have, right?
Top

To be honest, I don't think breasts on female characters would be such a bad thing. I'm not saying that makes them 'attractive,' because let's face it, they have the heads of rabbits/other animals. Kinda... not right. :I But that doesn't mean we have to NOT have breasts on them. It makes it easier to spot males from females in a game such as this.

I notice that in some pics, the wolf and rabbit males have muscular pectoral muscles. Thinking about this anatomically, the females could definitely have breasts and as long as we don't give them DD cups, I think we can all be mature about this, and accepting of the decision. This is coming from a person who draws both humans and anthro characters. I grew up with shows like Swat Kats, and even Looney Toons, or Animaniacs, and for some reason we didn't think breasts on a female anthropomorphic character was such taboo in the 90s... :/

I went ahead and sketched what I thought could be done to design a female in this universe, and what certain things could indicate a female, as opposed to boobs. I uploaded it on the 'fan art' thread, but I suppose this would be a better home for it. 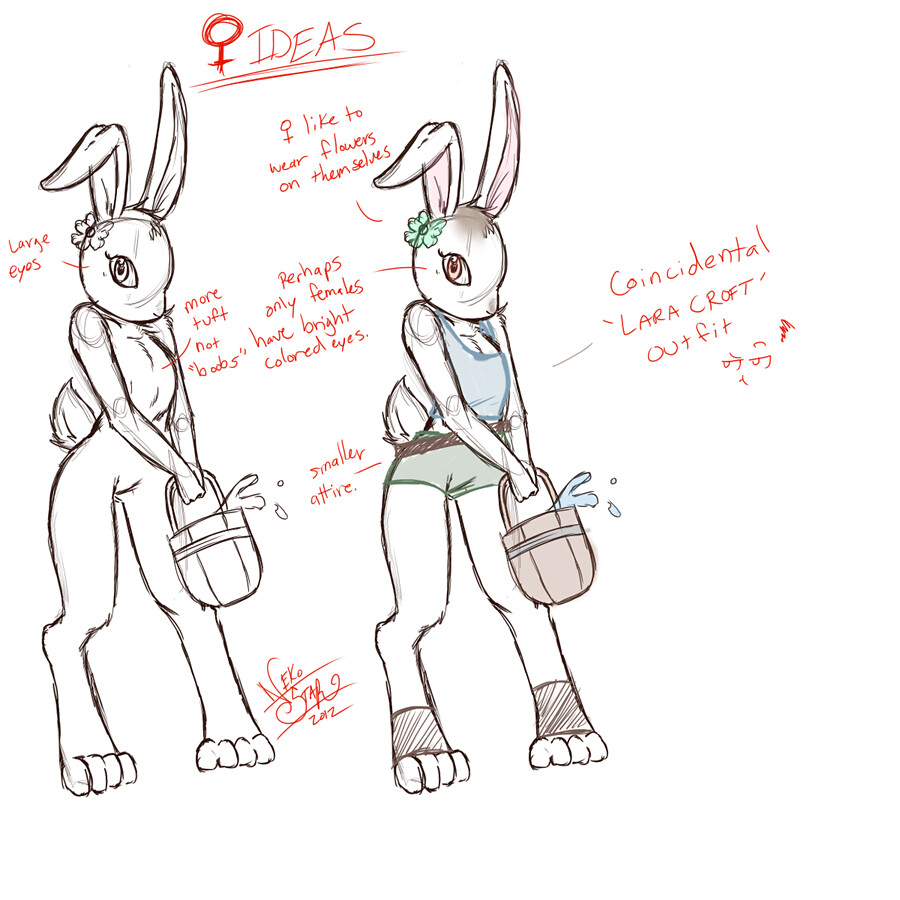 Reminds me of Lola Rabbit.

I made a list of things that differs between Lola and Bugs, atleast from what I could tell. 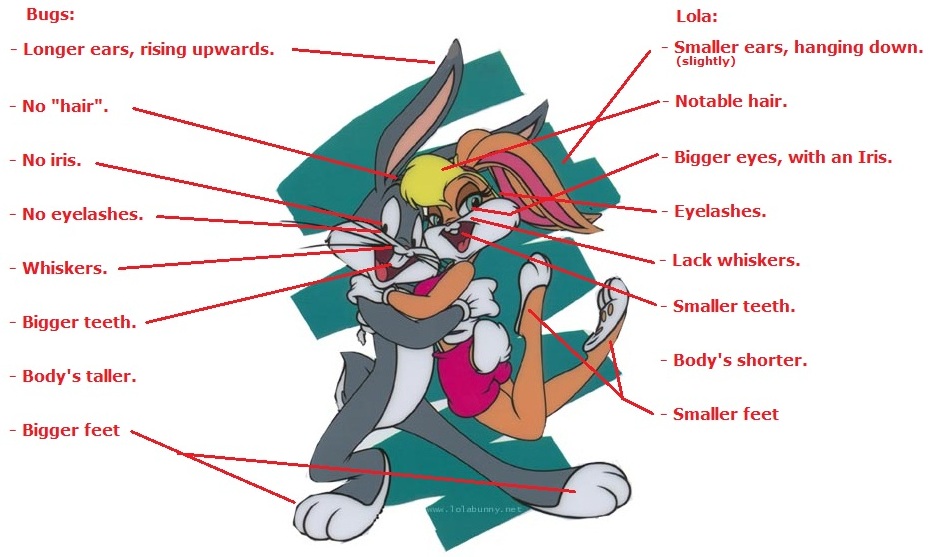 The same guidelines apply to this image, except for Bugs hair: 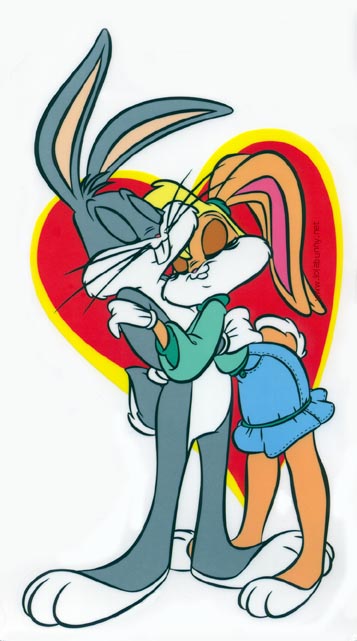 While I don't think there's anything wrong with your anatomy there, NekoStar, that's a very stereotypically passive, weak and pretty female character. I think comparing a male and female warrior would be more useful in proving your point, and it would also make your character fit better into OG world, since you can use one of the existing characters as a reference.

Also, here they specifically mention tiny waists, huge breasts and skimpy clothing as something they're unlikely to use. Flowers as jewelry or as patterns in the clothing would be one relatively clear way of distinguishing between male and female characters.
http://blog.wolfire.com/2009/01/female- ... vergrowth/
Top

Nice drawing, I can see some of the points being very applicable to OG. I think having the female characters to slender would kill the combat (XD Knee slapper, right?) because it doesn't do to have a broomstick with ears punching out wolves and dogs. I'd imagine that the devs will use movement to distinguish gender, and probably cultural signs as well. It's that immediate, visual cue that is tough with these characters.
I think hair and slightly smaller feet would do the trick for mid-range identification, and at long ranges you aren't supposed to be able to easily distinguish gender anyways. Having any resemblance of boobehs, not overdone of course, would be up to Wolfire. We shall see...
Top
Post Reply
127 posts