Haha, it's ok. We all fall into accidental necromancy once in a while.
Top

I think this is one of the most necro'd threads on the forums in any case.
Top

Here's my interpretation of a female Overgrowth character. She is inspired by Sarah, Turners first love. If you remembered Sarah in Lugaru wasn't overly sexualized, but she still retained feminine qualities. I imagined female characters having more finer hair and less bushy than males, less broader shoulders and wider thighs. She could be a female warrior that Turner meets and has a love interest with her, but is conflicted because she reminds him soo much of his late companion Sarah. It's a rough draft and I haven't put to much time into her hands/paws but I just wanted to put it up.

Other female traits that I brainstormed to separate them from male characters:

have a happy and safe 4th of July people. And everyone outside the states, have a safe and fun day/night all the same. 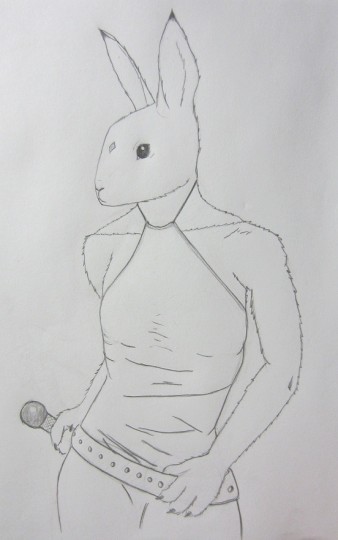 That picture: Yes.
In a few short sentences and an amazing picture you managed to summarize pretty nicely what I was hoping the female characters to be. I like the fur-texture difference idea too. It fits.
However, the one gripe I have is that the character still looks just that bit too human, as opposed to, say, this, here, but that might just be the stance and neck shape.

Also you forget that in Lugaru, all rabbit models were exactly the same shape, the only difference being, yes, the females wore t-shirts with breast shadow drawn on them.
Top

This probably isn't relevant but I'm gonna say it anyway. If you change your model to the 2nd rabbit guard and press V you'll hear a higher pitched voice than that of Turner or any of the other models currently in the game.
Like I said that probably was completely irrelevant but I just thought it was interesting.
Top

Glabbit wrote: However, the one gripe I have is that the character still looks just that bit too human, as opposed to, say, this, here, but that might just be the stance and neck shape.

Also you forget that in Lugaru, all rabbit models were exactly the same shape, the only difference being, yes, the females wore t-shirts with breast shadow drawn on them.

Yea, if you look at Turners model in the game(OG), Turner has a more meatier neck, which I toned it down slightly. I think what makes her look more human is her collar bone which I wanted to emphasize here without having to add shading in the picture.

I understand where you're coming from though, comparing to Aubreys concept image. If you look at our characters side by side, my character would seem taller in comparison. I wanted it so the height difference of my drawing compared to the ones of Turner and the other rabbit characters in game to avoid gameplay and clipping issues.

When women wear this type of clothing which wraps around the neck like so, the collar bone is a prominent feature and I think attractive feature. You'll see it often in one piece summer dresses, party dress like on the red carpet.

Your right in that Sarah shared the same model as the male characters, and just her color scheme was different. In Lugaru how they made her stand out was, her clothing, she was the first white rabbit and the only one in the village, her first lines to Turner was "Hey Honey Bunny" which signified they had a relationship. That method worked very well for Lugaru.

So other than appearance, Wolfire has the ability portray female characters by dialogue as well if they do not opt for voice acting.
Top
Post Reply
127 posts