It would be nice to have human characters as a choice, I'm not that big on playing as animals too often.
Top

This has been suggested and debated countless times. It's not happening from Wolfire. They're sticking to using anthropomorphized animals, for several reasons. First, it sticks with the style set by Lugaru, Overgrowth's spiritual predecessor. Second, Overgrowth melee combat features some pretty graphic violence- maybe not quite Mortal Kombat levels of over-the-top graphic violence, but it's gritty and brutal. It's a bit easier to swallow with cartoonized characters rather than portrayals of humans. Thirdly, the graphical assets- models, textures, concept art, etc- that they've spent so long working on would have to be all but scrapped. Fourthly, the five different races of characters in the game all play their roles in combat and the civilization and so forth- it'd be troublesome having to rewrite all of that and come up with replacements.

Basically, they had their reasons for picking animal characters to begin with, and they're certainly not going to switch over to humans after they've put this much effort into them.

However, while first-party content likely won't provide what you're looking for, keep in mind that Overgrowth is very moddable and somebody may release a human characters mod when the game is released- heck, if you have the skills for it, you could even try to make a humanization mod yourself

this mod is allready done here is a preview video of it. and yes you can have humans in Overgrowth. and if you want you can replace all models with humans without modyfing script files. just easy rename of a file will make the trick to replace all levels that are useing this type of model you had before. http://youtu.be/EjLiftqIiyU
Top

The way the legs move...

Yes, the leg movement is a little strange. Many animals legs have a different structure that humans. There are plantigrade (Human) Digitigrade (Dogs, Cats, Rabbits) and Unguligrades (Horses, Deer, Goats). 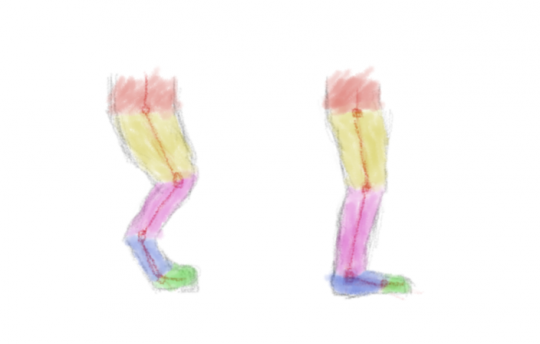 Because digitigrade has a longer metatarsal than in plantigrade mammals, the animations is a little funny when applied to a human character. It leaves the ankle-corresponding joint much higher in the leg than in a human as well. Digitrade mammals also are generally faster and quieter than plantigrade. That's why dog's can be so fast and cats so sneaky.
Unguligrades walk on the very end of the feet, like a human ballerina does. They are usually hooved because leaving such weighty creatures on their toes 24/7 with paw pads for fleshy soles would crush the bottom of the foot, so hooves came around to protect them.
To sum it up, because Overgrowth has animal characters with digitigrade leg structure, the human characters have to work with that rig and get some awkward stuff happening, although EdT did a very good job of keeping those oddities to a minimum.
Top

In the end, wanting to play as a Human in Overgrowth seems to be missing the point.
Top

ಠ_ಠ
You... your actually read the post right?
"In the end, wanting to play as a Human in Overgrowth seems to be missing the point."
"+1"

Overgrowth is about animal characters. Wanting human characters instead probably means you've missed the point.
Reading is for people who want to say something partially coherent and relevant, kiddos! Not that it ever helped adwuga or anything.
Top

Hey! I've read almost everything that has been read by me, and I always know what I'm talking about, and it's always "coherent and relevant". It's just relevant in a way too convoluted for the average person to understand. For example, if I were to post "Ogres are like tomatoes," in this thread, it is obviously (to me) a reference to the quote "Ogres are like onions," and my change in the quote ruins the purpose of the quote, because tomatoes are not layered, like Ogres and onions, just like humans would defeat the purpose of Overgrowth. It's just so obvious that I don't take the time to explain it.
Top

Uberbeard wrote:In the end, wanting to play as a Human in Overgrowth seems to be missing the point.

The entire point of the games isn't to play as animals or anything like that as I see it, it's to have a very neat fighting system with some fun jumping added in, animals are merely a good way to avoid the uncanny valley, they just happen to also be cool and allow jumping and whatnot, but there's no problem with wanting to play as a human in the games since the entire point I'd say isn't centered around playing as an anthropomorphic animals.
Top

It's still a bit part of the games, there are plenty of nifty fighting mechanics to explore with humans in games that aren't Overgrowth.
Top

certainly it's a part of the game, but I wouldn't define it as integral, and it's doubtful that people who are averse to playing as animals would think it integral either.
Top

I would like to see humans in the game, but NOT as characters but as some kind of backround species, like the race from assasin's creed or the Proteans from Mass Effect.
I think the plot could be like this: The wolves are trying to unhearth a ruin that has been buried underground a long time ago, and contains some "phat lewt", the protagonist, for some reason, tries to stop them. At the end of the game, it is revealed that the ruins are actually a bunker filled with books and records that describe how mankind created the anthropomorphic animals and, (surprise, surprise), the latter revolt and the ensuing war ends with the humans being brought into extintion, and the world devolving into a medieval age. At the very end, the protagonist opens a chamber and finds out the "phat lewt" to be: FIRE WEAPONRY! And so leaves the chance for overgrowth 2.
It may not make much sense but, hey! It's a fantasy tale!
Top
Post Reply
39 posts