I read some stuff about overgrowth http://wiki.wolfire.com/index.php/Races and I found the article on cats and noticed that:

1. One cats name was Wiskerball...

I know that stuff like this is good for a chuckle or two, but is this the kind of stuff that will be in the actual game? Carrotville? Wiskerball? Colonel Prettypays? I know that it's most likely just a funny temporary thing, but I hope they take a more "serious" approach to Overgrowths story. ( I'm probably just overreacting, but I felt like it was an interesting topic )
Top

Well, the wiki is open for anyone to modify, so most likely someone was bored and wanted to write a silly story.
Top

Yeah, I believe those stories are fan made, not by wolfire team.
Top

HAHA, Carrotville is a nice name

last wrote:Yeah, I believe those stories are fan made, not by wolfire team.

And the chieftain of the rabbit's village is known as 'Carrot Top'. 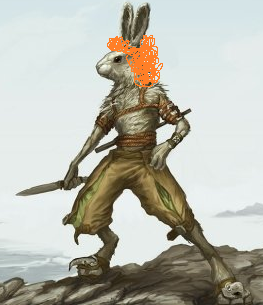 Okay, thanks for clearing that up guys.
Top
Post Reply
8 posts • Page 1 of 1