OvergrowthJS - 2d Overgrowth in your browser!

OvergrowthJS - 2d Overgrowth in your browser! 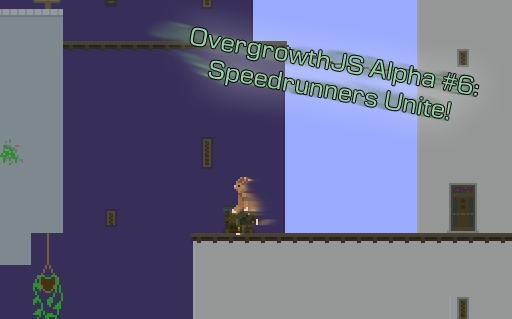 Public release note:
This is a javascript/html5 powered game I've was working on a while ago, but it never saw the light of day outside the SPF. So now I'm releasing it for anyone to play. Enjoy and post your replays here!

-Alpha #6 changelog-
-Notes from Alpha #1:-
After watching the overgrowth weekly #52, http://www.youtube.com/watch?v=9tWIvNcSAuI, in which Silverfish discusses his 2d Overgrowth game, I decided to try it out. It didn't quite turn out to be what I expected, and after a while I decided on developing a 2d overgrowth game myself. I've only been working on this prototype for approximately 3-4 hours, but I already have a working rabbot character jumping around a tile-based scenery!

I decided to recreate the basic rabbit movement from Overgrowth, running and jumping, and in order to do this, I needed my very own rabbot. So I sat down and drew a 32x32 pixel stick-version of turner:

The spritesheet is based on screenshots, and all the poses seen have been drawn to accurately match those of turner's ingame, so that the player may easily recognize the character's movement. Since Overgrowth puts a huge emphasis on sound effects ingame, I shamelessly grabbed the .wav-files and mixed some of them to create a jumping and two landing sound effects. Depending on how hard you land, one of the two landing effects will play.

The scenery is currently made up from a placeholder Super Mario tileset, but this will be changed later in development.


-A quick peek at the technology-
A friend of mine has been working on a javascript game engine, using the canvas element introduced by HTML5. For those of you who aren't familiar with javascript or HTML5, new extentions to web-browsers have, among other things, created an alternative to flash. Games scripted with javascript can for example be run without any plugins whatsoever, and almost all smartphones and mobile devices support HTML5, and can thereby view new these new types of multimedia which were previously (almost) inaccessible.

My friend's game engine on which the prototype runs, SolidCoreJS is far from complete, but provides a basic framework that simplifies the process of creating entities such as characters and making tile-based maps. To test this engine, i've created very basic prototypes with characters running around, which were easily modified into the Overgrowth 2d JS prototype.

While the engine is able to play sound effects, the current build uses unstable ways to achieve this, resulting in delayed sounds that cannot be stopped, hence sound is disabled by default. It can however be enabled by checking the "Enable Sound" checkbox. Please note that enabling sound may result in your browser crashing, but it should work fine.

This looks sick thanks for all your hard work.
Top

is this one of those one of the games that go in the chrome web store? because if it is, you should totally put it there
Top

Sorry for the necro, can you host this on some sort of free hosting somewhere? Itch, or github pages, or something along those lines?
Top
Post Reply
4 posts • Page 1 of 1