by xzener
I noticed Lugaru had a short story. I beat the story mode in a day and Im not good with tech so I just replay the chalanges. but, In Overgrowth can the story be way longer, not be a map and instead you could fast travel to places or free roam there like in skyrim,I love free roam and that would result in an instant preorder! and you could replay missions.

by Korban3
The game will be mission based as Lugaru was, but I believe David has plans to expand on the gameplay and storyline beyond what he was able to in Lugaru.
In fact, he already has. Now there is the possibility for mission goals involving avoiding capture and retrieving packages.
It won't be free roam because that's a ridiculous amount of dev time just to have the player spend half of their time in game walking from one city to another. It also removes much of the capability of telling a strong, solid story.
Ignoring the RPG component in this case, this graph show some different storyline types. I'd rather not see OG be one of the last two. 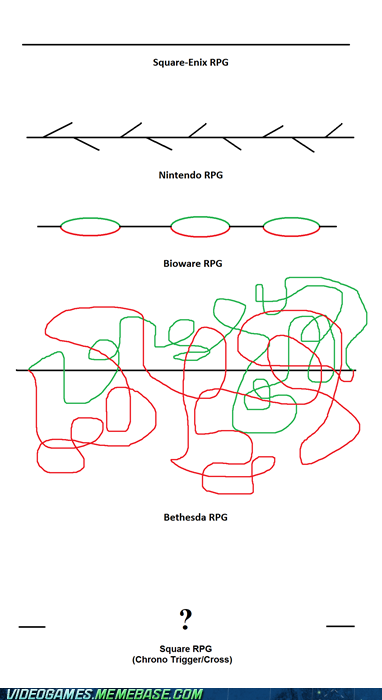 by wfsw32
I honestly hope the narrative is good. Lugaru seemed to be full of cliches and seemed quite vapid. The gameplay was amazing but I hope that the quality in Overgrowth is greater than in Lugaru.

by Count Roland
The majority of lugaru was made before David was in high school, so that explains quite a bit.

by Coincidence
Given what I've read in the comic so far, the story can be expected to be a semi-dark fantasy, I suppose. It could be like if Bryan Jacques didn't give any regard for his target demographic.

I find it difficult to imagine the current in-game character models doing genuine acting in their current state. Comic style might be the way to tell the story of Overgrowth, like what Remedy did with the first Max Payne game. That would fit considering that a comic is already up and going.

by Ninjaswag314
From what I have heard overgrowths universe will be filled with lore. Well in the comics at least so be prepared for a good story.

Story essentially says a screenplay is all about changes. In the beginning of a scene, circumstances MUST change before the end of the scene, or else it should be cut out.

An example of a bad story: Fred wakes up. He washes his hair and brushes his teeth. Then he goes to school. He listens to his teacher, he enjoys it. Then he goes home and goes to bed. The End.

An example of a good story: Alice wakes up and remembers she has a job interview to attend this morning, and is running late. She gets dressed in a hurry, and rushes out the door. As she's running through the streets, a bunch of thugs attack her. However, she has taken self-defense lessons a few weeks earlier, and beats them up. Now her clothes are all tattered and she looks like a mess, she feels like the interview will be a train-wreck. Instead, she stands out and gets to tell a cool story about how she beat up a bunch of thugs on the way to the interview, and gets the job! The End.

Stories are hard to write, it would be easy if we could just base our story on a magical formula, a basic plot of some sort...

Turns out, all stories can be categorized as one of The Seven Basic Plots, there is even a book talking all about it, and you can read most of it online, FREE, on google books!

Select a plot you like, then fill it in. I've written summaries of my favourite plots so you can quickly find the one you like and skip to that chapter of the book. Most plots also have a dark edition.

Essential pattern: Succession of terrible ordeals, then periods of respite and guidance from helpers.

Monsters (threats which can result in hero/heroine's doom)
1. 'Active': Predator. It wanders menacingly or treacherously around the world, seeking to force or trick people into its power.
2. 'passive': Holdfast. Jealously guarding treasure or a Princess
3. Avenger: Challenged, it leaves its lair and pursuits revenge

The journey to the underworld

(we also saw there the hobgoblins, satyrs, and dragons of the pit: we heard also in that valley a continual howling and yelling, as of a people under unutterable misery, who there sat bound in affliction and irons: and over that valley hang the discouraging clouds of confusion: Death also doth always spread his wings over it. In a word, it is every whit dreadful, being utterly without order)

1. Consult with the dead (about the future)
2. Warning from the dead

1. The Call: Life in some "City of Destruction" has become oppressive and intolerable. Supernatural visionary shows direction to life renewing goal.

3. Arrival and Frustration: Edge of goal, but looming over something impossible

4. The Final Ordeals: Hero must undergo a series of tests (number 3) to prove himself

5. The Goal: After a last 'thrilling escape from death', the kingdom, 'Princess' or life transforming treasure are finally won

Summing up Voyage and return

1. Anticipation Stage and 'fall' into the other world: We meet the heroes, they are naive or incomplete or ignorant
2. Initial fascination stage or Dream Stage: The new world is exciting
3. Frustration Stage: Shadow begins to intrude. Oppression
4. Nightmare stage: Shadow becomes such a threat it becomes a threat to hero's survival
5. Thrilling Escape and return: 'just a dream?'

Rags to riches summing up

Hero is weighed down by contempt and even prosecution in the opening scenes. Hopes gradually raised. Only in the end is there full fulfillment and prizes won.

A second way in which a story naturally takes shape in the human imagination is that which shows how some young, unrecognized hero or heroine is eventually lifted out of obscurity, poverty and misery to a state of great splendor and happiness.

Not an unbroken continuous climb...

1. Initial wretchedness at home and the 'Call': Usually at home, 'dark' figures maltreat them
2. Out into the world, initial success: First encounter with the 'Prince'/'Princess'
3. The central crisis: Everything goes wrong
4. Independence and the final ordeal: See hero in new light, fights evil
5. Final union, completion and fulfillment: Their prize; loving 'Princess' etc.

Similar, but does an error in stage 2 which results in his/her doom in stage 4/5

Summing up Overcoming the Monster

1. Anticipation stage and 'Call': Aware of danger from great distance. (Special agent gets a mission)
2. Dream Stage: Prepares for monster. Fights and finds his foes
3. Frustration Stage: Face to face with monster. (Captured by Dr. No)
4. Nightmare stage: Final ordeals begins. Fight monster. When all seems lost, there is a 'reversal'
5. The Thrilling Escape from Death: In the nick of time, the monster is dealt a final blow
All times are UTC-05:00
Page 1 of 1
Powered by phpBB® Forum Software © phpBB Limited
https://www.phpbb.com/