zomsabra wrote:Hmm...So many questions I could ask, but Ill keep it to one.

Do you have any plans for a Multiplayer Dual mode? Or any kind of online multiplayer?

This question was answered in the latest Q&A.
Top

The last stream happened the day before yesterday. Thanks to everyone for your questions, so far it looks like we are going to have even more questions to pick from in the next Q&A in two tweeks time!

Here is the recording:

In the future will there be any additions of special weapons that serve functions other than combat? Such as grappling hook/ninja rope, shield, smoke bomb, or any other crazy non-standard weapon you cats come up with?
Top

It would be really great if you were to answer this question for me as I am doing a research project on the subject at school.

To begin with you had quite a small following, so I'm wondering, what is the most effective thing an indie developer can do in order to advertise their game successfully? Can you tell us a bit about your own experience here, or give us any resources to learn more?
Top

I have a question about the Editor for Overgrowth and the modding possibilities of the game:
How open will be overgrowth to the moding-community in the end, so which milestones are set in the matter of "This must be done" and can you imagine the projects which the community comes up with then? e.g a total conversion?
Top

Are you going to be implementing new game modes? Which ones, and where will they appear in the game?

Will the characters be able to put on or take off armor during the game?

Karel wrote:-Are any improvements to be made on parkour, and movement in general (Like, we are currently forced to spam jumping to walk up slopes)

I was going to ask that too, good question

Karel wrote:- Did you think of a way to rebalance/nerf the leg cannon, or making it harder to use/easier to counter?

I'm guessing you mean when you jump on an enemy and stamp on them? If so:

Maybe for blocking, if you hold block while the enemy is airborn you could grab their foot and kind of swing them fullspeed into the ground xD That jump stamp is pretty overpowered, and blocking it this way would also be quite overpowered, so that way it kind of evens it out. And maybe if you jump quite low and kick them and they hold block it doesn't work as well because the character would have slightly less time to react, and if they jumped really high the character would see it coming and it would be an instant leg-grab-swing-into-the-floor maneuver :p

Also a question from me:

Do you have plans to make AI be able to see your shadow? that way even if you are hiding behind a corner, you have to be careful because they could see you moving. Also you could hide in the shadows tactically :3
Top

david you are a big role model for me and a lot of my class mates in our game progrograming and design classes. so my question is:
are there any skills you feel are a must have to be successful when entering the gaming work field and is there a skill that companies look more for when considering a person for new hire?
Top

Here's my question: R u ever going to adjust the rat character? To me I think he needs a bigger head or something because right now they look kinda funny in my opinion. (BTW the screenshot is a rat exactly standing next to a rabbit) 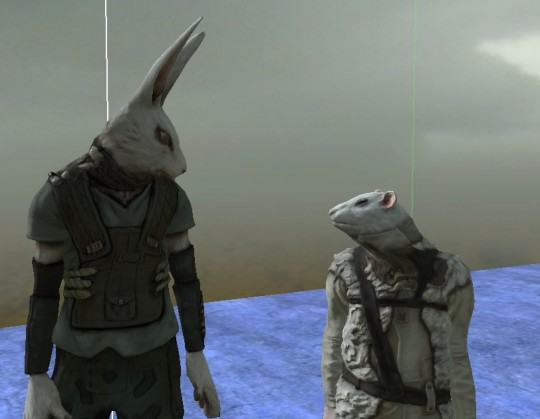 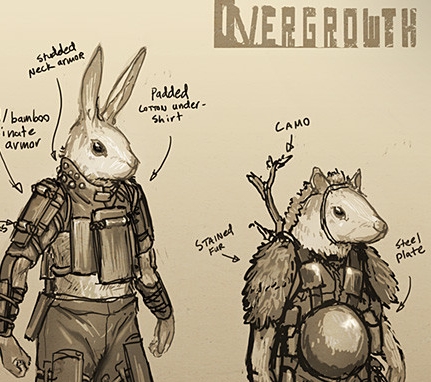 Q: Magic. Are you ever going to add magic in the game? I know it's a lot of work and grueling to a point, especially working with particle physics and all but the end product could be sweet.
Top

Hydraxil wrote:Q: Magic. Are you ever going to add magic in the game? I know it's a lot of work and grueling to a point, especially working with particle physics and all but the end product could be sweet.

You haven't read too much about the world Overgrowth is set in, have you?
Top

When you started working on a sequel for Lugaru, you couldn't find any engine that was available and suited your needs, so you made your own engine, Phoenix.
Eventually, when you finish Overgrowth, will you consider other engines like Unreal, or Unity? As they are now available as a viable choice.
Or will you continue using and developing Phoenix for future projects that are similar to Overgrowth or an Overgrowth sequel?
Top

will you be changing the hand to hand combat or are you happy with the way they punch and kick?
Top

Q1: Will there ever be quick time events? (Pressing certain keys while a rat is on you for example)

Q2: Will there ever be a a sort of "critical hit" type of thing? I've always imaged that slitting some's throat from the front would have the same effect and the spear is a two hit kill. It would be cool if a stab in the heart would also be an insta'kill. I personally think that it should be a priority as the combat and damage systems seem to be what everybody wants.

Q3: Will there ever be more advanced environmental hazards? For instance, will I ever be able to impale someone by kicking them into a spike?

Q4: Sorry if this one's a bit tough, but can you estimate when the final product will be released?

Thanks for doing a Q&A like this. It's nice and simple.