kehaar wrote:Hey, I have a question for all you artists: have any of you Wacom tablet users tried both Gimp and Photoshop (and Corel Paint Essentials, for that matter)?

I've found Photoshop to be much better than Gimp. This is coming from the guy who argues for Blender as opposed to 3DS Max, Maya etc too, so it's not like I'm opposed to free programs. I just can do more with Photoshop, usually faster too, than in Gimp.

Depending on what you want, there might be some other free programs that work better than Gimp. Have you tried Paint.NET ? I hear it's pretty good, but haven't tried it myself.
Top

Gimp is a pain to use. Really clumsy. If you're planning on doing any serious work I'd go for photoshop.
Top

ShinyGem wrote:Anyways! Hm, I called this one "shorts bunny", I ran out of ideas for names I guess...

Is that a bola? I guess it could be, but I always thought bolas would have slightly heavier weights and somewhat longer ropes. If the weights are too light, they won't break the bones they hit, and the rope's short enough that it could maybe work on a bird or something, but there'd be no rotational force if it hit anything that's not tiny compared to the thrower.

Here's an image of a much longer bola with bigger weights.

Of course, if that's not a bola then disregard this.

The image is pretty good otherwise, nice detail in the clothes and seams and wraps.The angles and/or foreshortening seem a bit weird in the front leg, but maybe that's just me.
Top

@Endoperez Humm, thanks, I didn't know the name of that, so I couldn't look for references! I'll fix eet! Apparently it is used by some of my compatriots, the Gaúchos, on cattle, nowadays. Hmm, the more you learn.

Those digitigrade legs are my Achilles' heel, I think I got them working in profile, but, sprinkle some angle in the drawing and they feel off again. XD
Top

I had made this backdrop for a bunch of renders of a car I did for school. I thought it looked nice so I decided to take the opportunity to make some OG fan art.

EDIT:
New version with Turner in. Also toned down the bumpmap on the rubble.

Wow, you took the time to carve that, for the sake of fan-art? Your dedication is inspiring.


Wait... is that graphics? The only thing that betrays it are the rocks a the bottom and some of the edges.
I like the lighting. It's pretty.
Top

The absolute best art software is My Paint. By far. You can try it from mypaint.intilinux.com. It is completely free and Linux native with installs for Win and Mac. Did I mention it is free? It has great blending and a lot of brushes. It is great for simulating traditional art as well. I recommend this to everyone because it is amazing. Don't buy Photoshop until after you have tried this and only if you hate My Paint. Srsly.
Top

adwuga wrote:Wow, you took the time to carve that, for the sake of fan-art? Your dedication is inspiring.


Wait... is that graphics? The only thing that betrays it are the rocks a the bottom and some of the edges.
I like the lighting. It's pretty.

I didn't create the models, they are taken straight from Overgrowth. So yeah the things I did was put the models there, create the backdrop, do the lighting, compositing, posed the character, made materials and rendered it.

I uploaded a new version with Turner in it.

If anyone wants a different angle, let me know and I'll render it out for you. This has all been made in Blender by the way, if anyone was wondering.
Top

Korban3 wrote:The absolute best art software is My Paint. By far. You can try it from mypaint.intilinux.com. It is completely free and Linux native with installs for Win and Mac. Did I mention it is free? It has great blending and a lot of brushes. It is great for simulating traditional art as well. I recommend this to everyone because it is amazing. Don't buy Photoshop until after you have tried this and only if you hate My Paint. Srsly.

Hard to justify, since I'm just makin' comix on it...
I worked a while in Corel essential that came free with the tablet, and it's ok. Not a lot of flex for moving stuff around...
Top 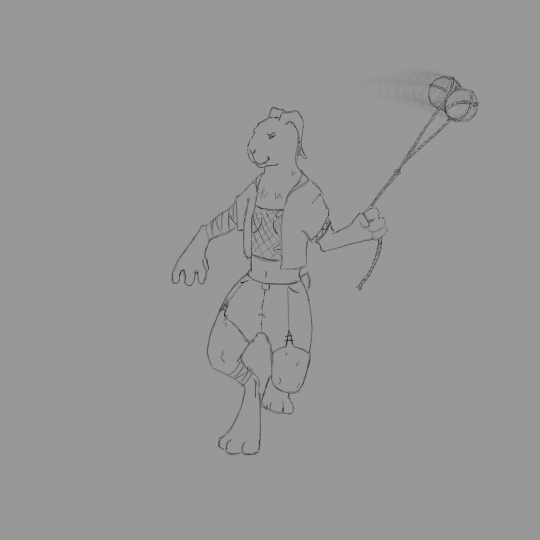 I added some smudge as the "spinning motion" of the bola, hope it's at least decent, better name as well (Reminds me of Lola Bunny)..!

The bolas are awesome. And that's a lot of messing you did thar. Any conclusive favorites? And when I get my computer back I am gonna makes some OG fanart I think. Maybe

Also, nice render Silverfish. My Kindle probably isn't giving me the best view of it though

@Korban, well, it's hard for me to say anything about it because I can't use them to their fullest potential, however what I can say is:
I liked the interface of Autodesk Sketchbook, it's rather intuitive and very user friendly, the amazing brush variety of MyPaint, they are not only many but they are awesome as well, they are pretty by themselves, and Photoshop Elements 8 is just ok, haven't tried much, but seems too clusttered and not very time efficient for a newbie like me to meddle with.

In the end, I still use Gimp, since that's the one I know my way around and can get things done rather instinctively and quickly, I think you should use what you are comfortable with, I haven't seen any noticeable difference in my drawing's quality, only the time it takes to do it with other programs. ¹ 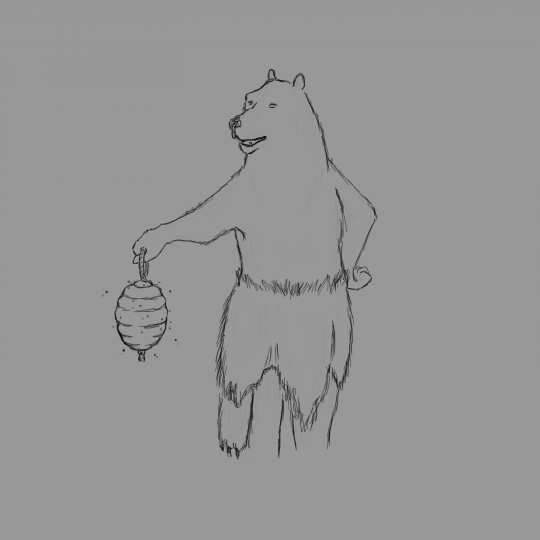 ¹ Keep in mind my opinion on such things doesn't hold much credit, I just draw because I like to, I'm not particularly good at it. Perhaps if my drawings were more complex, I'd see the difference in quality, for instance.

Hey guys! So I haven't done any fan art for a long while. WELL I'M BACK and learned quite a few things along the way.

Hello, my name is Jean-Luc Thomas, i did some stuff i thought would be really neat if it was added into Overgrowth. So i braved the world of imagination and came up with some stuff. these guys are named The Avians. They live in giant trees and commonly use bows and arrows, and shorter quicker melee weapons. They prefer to stay secluded and don't tend to mingle with other species. (hey, imagine a city, a place of peace, known to all in the land, where all species interlace, and the culture is vibrant.)(anyways back to the avian)

Avians are skilled particularly with bows and daggers. There abilities are of course different from other species, they are able to fly via the roll key. instead of flipping you can flap... However they do have in flight stamina, so you can glide through the air all you like but you only have a limited amount of flaps before your wings become to tired and you'll have to glide to the grown. you can also dive down fairly quick using the block button and for a short amount of time you can lift your opponent into the air and drop them into the jagged rocks below... youch.

Naturally, Most Avians share a hatred of feline kind. However some know better than to put up racial barriers, argue on petty differences and past hurts(which would include many of the Great wars between their kind)

Avians lack luster in defense and knock back power, but what they lack there they make up for with their talons which even alone are formidable weapons. They're naturally swift creatures so leaping out of reach from an opponent is easy for them.

Great trees, thousands upon thousands of years old stretch out of the great forest ground, Homes etched into the very ancient bark of them. And where homes cannot be etched, stone and wood are cut to living quarters. beware all those in the lofty trees, the traps there are many in number, and below upon the forest ground are set sharpened rocks.

Avians will not tolerate invasion of territory, where there signs spell their name, even the strongest of warriors are advised not to terry within the confines of their hollowed ground.

(p.s. to the guys at wolfire, you've brought quite a few laughs and good times my way. Thank you for making such amazing stuff.) I may make a blender model too!

You can favorite my picture and watch my profile on Deviant art if you like, that would be fantastic.

@Ageshero, that's a very nice concept art, I see you took your time to develop them and all, however, looking at your deviantArt page, I noticed you stated this was more of a suggestion rather than fan art, the problem with that is that in Overgrowth lore only mammals mutated to their now anthropomorphic state, hence why a bird race wouldn't quite be possible, and bows aren't a certainty to be in. I can see them in a "Race Expansion" mod, along with other popular animals, though.

But please, don't let me discourage you from developing them further, they are looking quite interesting, specially backed up by the nice art.