Recently on the Wolfire Blog, Aubrey posted a storyboard they had done about a scene near the beginning of the game (linked here). While the dialogue was pretty good, there was a few things that I noticed could be improved. First, I'll dissect what is lacking in the dialogue, then I'll present my alternative. Now I know the dialogue is not final, but I'm gonna do it anyway.

So here are the first two clips. 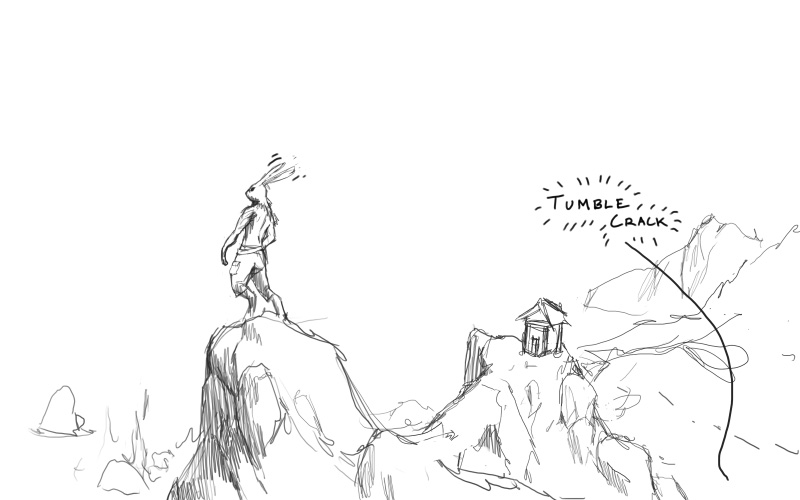 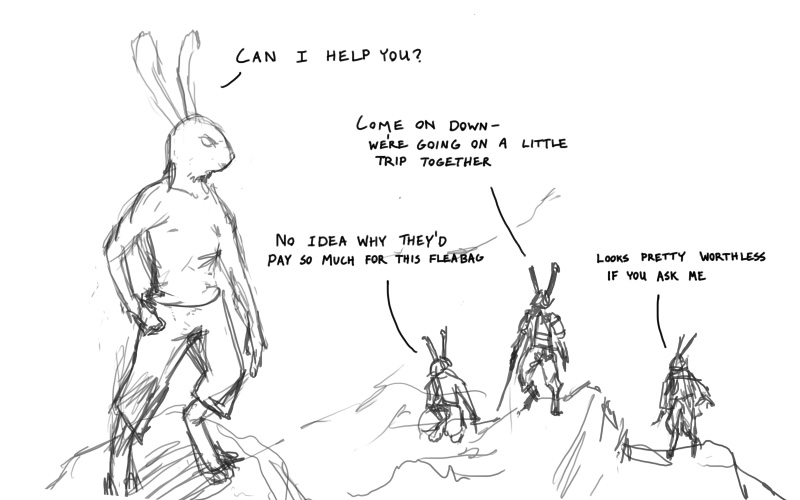 Now here we have Turner standing on a cliff when he hears a sound. He spins around, confronting the intruders with an ominous "Can I help you?" As Turner reveals later, there have been multiple attempts by bounty hunters to take him captive, so you'd think he would be a bit more suspicious when three dudes sneak up on him instead of offering a helping hand. Turner's not the only one at fault here. Two of the bounty hunters, after their brilliant plan of sneaking up on Turner had been foiled, resort to insulting Turner's appearance while their leader claims they're going on a trip together. The bounty hunters responses don't make much sense together, especially right after they tried to stealth take out Turner (and failed miserably).

The next two clips are fine, but I'll show them too for context. 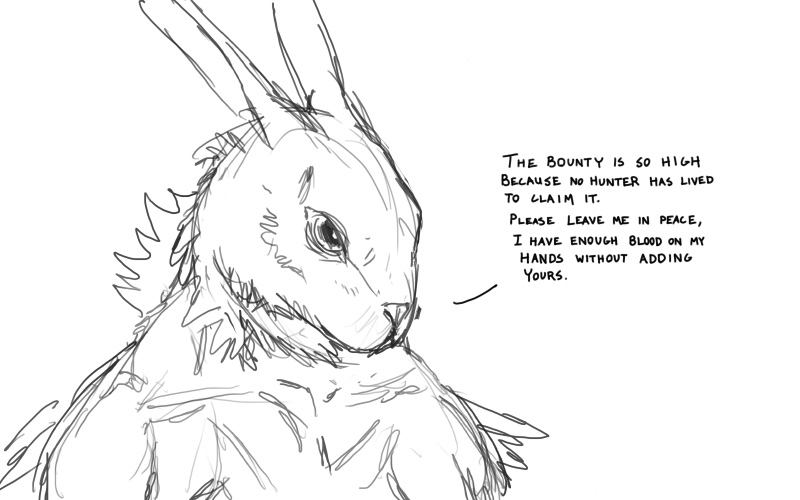 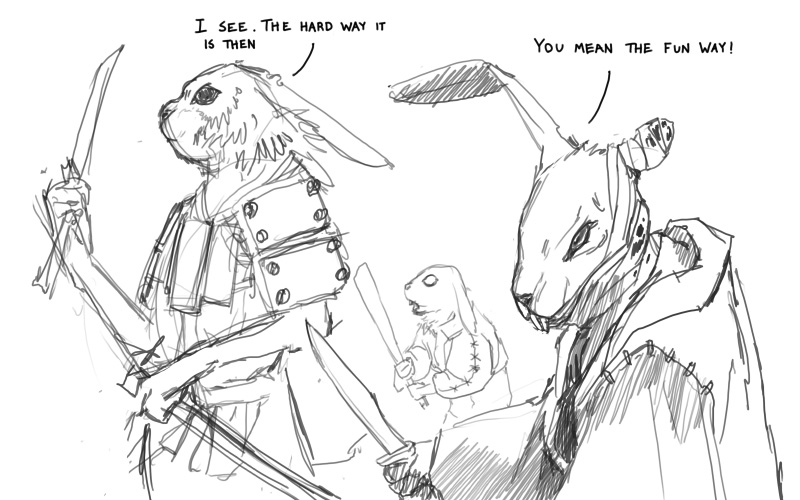 So now for my revised dialogue. I'll show the clips again, this time with my dialogue below them, plus an explanation for the changes. Here goes!

Left bounty hunter - "[curse] it, [character name], you're as clumsy as a [clumsy animal]!"

Bounty hunter leader - "Quiet, fools! You, get down here, someone wants to see you very much. Enough to put a bounty on your head."

Here we see Turner give a more wary response. The two bounty hunters quarrel about their poor ninja skillz while their leader rebukes them and commands Turner to get down, because someone wants to see him. Hopefully this is a more natural response on all the characters parts.

Turner - "What they want is no matter to me, nor how much they pay. Too many bounty hunters like yourself have come for me, none have claimed what they desire. Leave me be, I have killed so many; your deaths would be meaningless."

This is basically the same meaning as the original, just changed so it fits my version of the previous edits.

Bounty hunter leader - "Your words are fearsome. We'll see if you live up to them."

Right bounty hunter - "Or die by them!"

Once again, basically the same thing.

I hope these edits make the whole scene feel more natural and interesting. My main purpose for doing this was to offer any assistance in writing dialogues and the like. If you think you have better ideas for some parts, feel free to post them. And of course, many thanks to David for coming up with Lugaru and Overgrowth! Without you, we would not be having this discussion in the first place.
Top

I don't think it makes the scene more 'natural', but not bad, for what it is.
Here's my renedition:

Rather then just lambaste Manwithnoname's suggestion* and then cop flak for not being friendly enough, I'll try putting my dialogue where my mouth is.

Frame #2
Turner: (turns to face hunters) "Yes...?"
Hunter: (talking to Lead Hunter) "You sure this is our guy?" (looks up at Turner) "I can't think why they'd be willing to pay so much for this fleabag."
Lead Hunter: "Aye, that's him. Come on down you! Some folks are real eager to meet you."

Frame #3
Turner: "You want nothing to do with me. The bounty is high for a reason." (hangs his head) "Now please, leave me be."

Now, this makes the scene more 'natural', I think. It seems to work better with when compressed, as dialogue usally does. Because that is how people usually talk; with less words, not theatrically.
Though Overgrowth does take place in a completely different world, so the inhabitants might have a very different manner of speech too.
Top

My opinion on how it would go.

Panel 1
*clatter*
*Turner turns around* (it's what he does best)

Panel 2
"You sure this is him?"
*Leader nods*
"God knows why they'd pay so much for him."
"Hey there! Someone wants to see you real bad. Be a pal, and come with us!"

Panel 4
*they take out weapons*
"I guess this means we'll have to kill you. Pity, I just cleaned my blade"
*rat smiles*
"Let's just try to enjoy this."

More panels
*crap being beat out of bountyhunters*

Next panel
"They never listen..."
*Looking heroic on the cliff*
Top

Looks like it to me. The one on the right in the last panel.
Top

it's a bunny with it's ear cut off.
Top

It's his teeth, and the way his face is more narrow, and long than the other bunnies.
Top

Sandurz wrote:It's his teeth, and the way his face is more narrow, and long than the other bunnies.

Look at the second panel. Long ears indicate three rabbit bounty hunters to me. But in fact it doesn't really matter.

@Man With No Name
As Zhukov already said you are missing the story entirely.

It is kind of natural that the one not getting the story at all is the one who opens the first post to correct the "mistakes". This shows the one problem of this story board.
So how to make the irony/sarcasm of those original panels more obvious without spoiling the fun?


P.S: Zhukov's dialogue is not bad, but I am perfectly fine with the original.
Top

tokage wrote:@Man With No Name
As Zhukov already said you are missing the story entirely.

It is kind of natural that the one not getting the story at all is the one who opens the first post to correct the "mistakes". This shows the one problem of this story board.
So how to make the irony/sarcasm of those original panels more obvious without spoiling the fun?


P.S: Zhukov's dialogue is not bad, but I am perfectly fine with the original.

I'm missing the story entirely? I would like to know what the story is then. I thought the story was pretty straight forward, bounty hunters coming for Turner, Turner revealing the fact that many other bounty hunters had tried, the bounty hunters think they have him handled, and I assumed that Turner kicks their collective butts after that.

So please, tell me what I missed.
Top

Zaphon: That would be a great alternate version of the game. I can see it now... Lugaru: GHETTOGROWTH. Mm-mm, Turner is on several quests to find the mythical bottomless bucket of chicken, the largest watermelon in the world, and of course, Mount Marijuana, a mountain as tall as Mount Everest, only made out of pure marijuana. (Note: When he reaches Mount Marijuana, a Cri- I mean, Raider, sets fire to it, causing everyone in the world to get high. When Turner wakes up from his longest high ever three weeks later, he will redirect his efforts to find the Sohigh Desert, with its rolling dunes of cocaine.)
Top

Man With No Name wrote:So please, tell me what I missed.

Ever thought of the possibility, that Turner purposefully gave a sarcastic remark, because he actually *was* aware and saw right through the fact that he was targeted by bounty hunters again? Same with the bounty hunters, maybe they knew that Turner already saw through it? Maybe they never intended to fool Turner into something, but just tried to act strong through euphemism (the middle one) and threats?
I read it that way and oh wonder, no corrections because of logical failures needed. That there could or maybe should be different wordings is a matter to discuss, but your version has a whole different story, because you 'corrected' what was in the way of your understanding.
Last edited by tokage on Mon Apr 13, 2009 4:01 am, edited 1 time in total.
Top

Hah, I wasn't aware that the dialouge was uhm, ghetto,
they were just creepy, frisky redneck-types.
But gangstah-style could be tight also, aiiight son? Word up.
Represent!
Top
Post Reply
57 posts