by bobdole
I made these 12 maps. Originally I was going to turn it into a campaign, but it was just too bloody buggy and time-consuming so I never did. If anyone wants to do this they are completely welcome to. Anyway I took the liberty of naming them map1-12 so that you can play them as challenge levels. Originally there were 14 but two were buggy so I had to kill them. I tried to do some different things with the engine, like creating cities, mountain cliffs, forts and villages and stuff, which seemed more interesting to me than just fighting on the open ground.

Also, while I'm at it, some suggestions for the Overgrowth Map Editor?
(1) Get all the glitches out, pleeeaaase, I lost like five or six good maps to these things. It was just too irritating to keep making them and losing them, especially when I tried to add dialogues.
(2) Make some way to move/rotate an object once it's been placed? Often there were times when there was no way I could get into the right position to put the object I wanted (especially when making buildings) and it just generally made the whole a lot more difficult than it should be.
(3) Some way to manually set the numbers, please! When you're trying to make a town and the buildings have to be at right angles it's such an incredible nuisance to spend five minutes overshooting the angle marker thing in order to get the right number.
(4) If this isn't too difficult (I have no idea) work on the AI when dealing with buildings and walls and stuff? They work great on open ground but once you get them in an enclosed space they just run into the corner and jump up and down or when you climb up a rock they totally lose track of you and just go walking stupidly off. It kind of takes the fun out of it sometimes just cause the AI doesn't know what to do with blocks and walls and stuff.

by bobdole
Oh, forgot to add, I included a monochrome texture for the snow levels, because I thought it looked better. Use it if you like.

by Jendraz
Cool, I'll try them out.

by VerdantPlanes
These levels are awesome! I just played through them, they're really fun to play and the design is amazing. I feel like these are some of the most aesthetically pleasing levels I've ever seen made with the lugaru engine.

Oh by the way, have you noticed how strange the actions are in some of the city levels. Turner spins around about 5 times before he hits someone. I wonder what made that happen?

). I really like the mountainous terrain, it's fun to try and climb/descend and also dangerous when there's nothing below you - you don't know if a rock face is too steep to stand on

I also like the challenge of moving around on the third level. At first I was a little annoyed that I couldn't get to the other enemies, but once I realized a possible solution it became a lot more fun.
Can't wait to try the rest.

by Count Roland
hahah I don't think you need to bother with those suggestions as they are already taken care of, or being taken care of as we speak.

by Groveller
These are great! I especially liked the outdoor not-snowy one. Very natural looking landscape, I thought.

Did have some trouble seeing at all in the first one, but that's my monitor being strangely dark. The one in the big cavern was great, except it's so hard to see what is what... took me 15 minutes to find my way back up to the top to get a rabbit i'd missed on the way down. Also a couple of spots where walking into a corner sends you to the outside of the cave. The level with the wolf and swordsbunny on the mountain top was fun, except that you tend to slide about a lot from leg sweepy attacks... at first I thought there were too many weapons available in that one, but then I realised it was balanced by the way most of them go flying of the cliffs so quick, hehe. Wall flipping all about the little city is crazy, travel from anywhere to anywhere else... unless you meet the rabbits or the wolf and get nommed. Or accidentally wall kick someone.

I think my favorite one overall was the one where you start on a big cliff and there's two bunnies by a fire right below you. Trying to flip and throw the knife at one just before landing on the other is great.

by pyromonkey994
how do u even play the maps?

1. i've sunk into the ground a few times...aka ground collision detection is pretty bad...namely on the grassy levels...probably caused by a switch in terrain type during creation that resulted in unclean bump-mapping
2. enemies and myself have gotten hung up on things...on one level i actually fell into a rock (not the ground) and was forced to leave to the main menu to retry)
3. some of the levels make Turner want to spin around...even with moves that he's not supposed to. this really, really messed me up, as it reduced most attacks to 1/2 speed...and you can see where i'm going with this
4. some of the enemies (namely those on level 11) have this tendency to want to jump. and in fact, sometimes they've hit me, then run away to go jump and get hung up on something, and then avoid me until i go back to hit them, where as level 11 was one of those levels that has problem #3, i'd usually end up getting owned.
4. enemies and myself have a tendency to want to fall through things on most of the levels. in fact i've been on levels where enemies that i've never touched will go and try to jump through a ceiling, go into infinite space and then fall back down to the place they were in and die, giving me a touch of death or heavy impact. (picture of me accidentally falling to outside of level: http://i10.photobucket.com/albums/a101/ ... ture44.png)
5. one of the levels (can't remember the level #) has certain spots where you can fall off of the main level and live...that's not a good thing, considering you aren't supposed to, and it's a bit irritating to have to go back to the main menu every time it happens...and on that level it tends to happen a lot considering one fell move in combat means you fall off in most cases (picture of me on ground of a level of rocks suspended in air: http://i10.photobucket.com/albums/a101/ ... ture33.png [notice the enemy shown on the map is not actually right in front of me...it's where it's meant to be])

don't get me wrong...these are well designed levels and incredibly fun =D
they just have some game-breaking issues (for me at least) that i'm not entirely aware of how they came to exist...it's completely bizarre that they happen at all

by bobdole
Uh, that's pretty weird. I had some troubles with a couple of the maps so I had to scrap them, the ones that made it in here were the ones that didn't give me any glitches. Anyways, didn't do any of that on my computer.
I hope Overgrowth irons out this sort of thing cuz' it's pretty annoying, I agree.

by Untadaike
Oh wow. Those are awesome. AWESOME!!! I love the one up at the top of the mountain, it's almost like an adventure game, jumping from rock to rock! And then all the villages and cities were cool. I freaked out cause I didn't know if they were hiding behind a corner, waiting to beat me up! I haven't played all of them yet, I'm trying to make them last! THANK YOU!!!!!

I'm using Tims' textures package, and it looks great with these maps! (from another message board post; sorry I don't know how to make links yet)

Does anyone know if there is a debug setting I can use to make the rocks and walls less transparent at certain distances? Sometimes I kind of like the surreal effect, but most of the time it detracts from the realism of the game world.

by Untadaike
If you haven't figured out how to put links on here yet, here's how; if you have, ignore this post: click on the URL button on top of the message box(where I've circled). This will make appear. Enter the http for the website you want a link to in between the bracket blocks. (For example, like this:

) Then there will be a link when you submit your message. 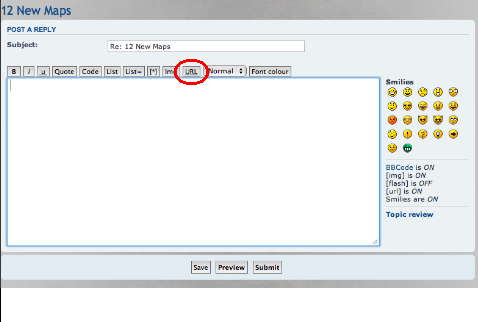 I hope it helped.

by BunnyWithStick
It's much more professional to use [url=http://www.wolfire.com/]texttodisplayaslink[/url], though.
All times are UTC-05:00
Page 1 of 2
Powered by phpBB® Forum Software © phpBB Limited
https://www.phpbb.com/