The place to discuss all things Lugaru.
Post Reply
246 posts

Indigo wrote:// Dude i can't blame you. But it's because this thread is basicly dead. You don't really have to post anymore if you don't want to. I've just desperately tried to keep it alive. But i haven't got many options right now. There's no need to waste time on this to be honest, not untill anyone else posts. My apologies, i can't magically make rp'ers appear

Is it too late to join? I've never done a text RP before.

If you have room for one more, I'll make a character and post it up.
Top

OH PLEASE DO SO!

But i recommend you read up one the last few pages mate so we can include you in our rp. Because we're in a bit of a mess.
Top

Indigo wrote:OH PLEASE DO SO!

But i recommend you read up one the last few pages mate so we can include you in our rp. Because we're in a bit of a mess. 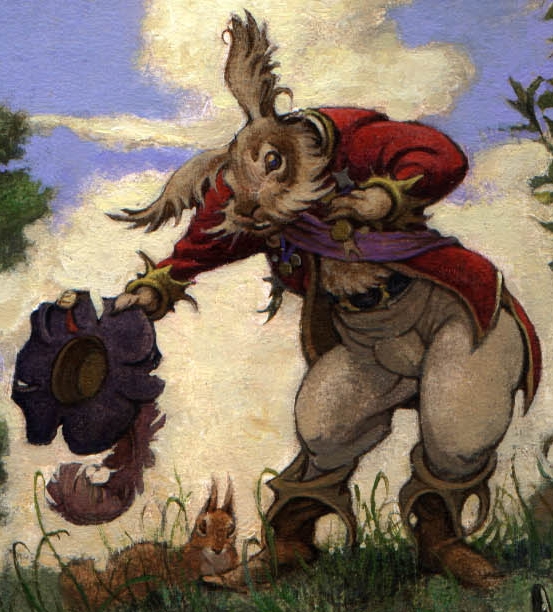 Name: Roanoake
Species: Hare
Occupation: In his own words, a "Gentleman of the Road."
Age: He's not telling, especially not around any pretty young females.

Background: If there is one word to describe Roanoake, it would be "gregarious." Many insist that there are two or three words more commonly associated with him, especially from tavern owners to whom he owes significant tabs. His past has only ever been revealed through his songs and drunken revelries, each story more fantastic than the last. The nearest anyone can make out is that his father was a ten-foot tall rabbit who could break trees with his bare hands and fought against the Cats. His mother was a fair young dame waiting to be rescued from an ensorcelled tower protected by dragons, giants, wolves, and all manner of goblins. Whatever his past, he hides it well.

It is rare to catch a glimpse of Roanoake when he isn't singing, dancing, fighting, or drinking. In these moments of respite, he sits and stares blankly outwards, his eyes filled with something strongly reminiscent of sadness. As quickly as this strange meditation comes upon him, the rabblerousing begins anew, usually more fevered and flustered than it was before.

Roanoake does not at first appear to be anything more than an oddly dressed hare who talks too loudly and can't seem to sit still. But as many bandits and mercenaries have found out too late, beneath this jovial exterior lies a dark strain of ruthlessness and cunning. An expert with the rapier and an odd parrying knife designed to trap and break swords, Roanoake has bested numerous foes.

Roanoake is a hare without a home, a traveler by heart and by trade. He can usually be found separating gullible kits of their coin and bamboozling townsfolk with some hastily thought out scheme. He is always ready to drink, dance, sing, and if necessary, kill.
Top

Is that Basil from redwall ?

Indigo wrote:Is that Basil from redwall ?

Yep. Brian Jacques died this year, so I was pulling out my old Redwall books and I figured Basil was as good a place to start as any.
Top

Lotus heard the request about Lily, and since the rest of the words were not immediately relevant, he walked over to her body. He knelt near her head and lifted it slightly. Blood dripped to the ground fairly fast, so Lotus bound her wounds. While he was doing this he sensed a very faint pulse. Lily was alive, to some small extent, but she did not seem to be fighting towards life. Instead she seemed to be moving away from it.

However, Lotus felt that faint pulse again. It was quite slow, beating a third as fast as Lotus' own. But it was steady, not fading or shivering. Lotus could see Lily's body had a high capacity for healing, but Lily herself was already far away. That pulse would eventually bring her back into life, but her spirit had already departed on a new path.

Lotus himself had been in her position before. He remembered his life as a spirit, and he remembered his own heart beating. It was that beating that eventually grew so loud and booming that he simply snapped back into his body. It had been terrible to live an eternity as a free being, and then be forced to live the rest of a natural life...

Not so terrible though, Lotus thought, at least he could still be of service in this world. He placed his palm over Lily's eyes and whispered to her. Lily was indeed somewhere far away, but Lotus could not mistake the resonance he was feeling from her body. He understood what Lily wanted.

Lotus gently pinched a nerve in Lily's neck, causing her body to reanimate and draw a breath. Lily held her last breath, and as she did, her heartbeat died down to nothing. When her chest fell, her body was silent and finished. Lotus picked her up carefully and carried her down the hill after the others. When he reached the others they asked why he had taken so long to bring the body. He simply replied; "Just a respect I would wish someone to pay me."
Top
Post Reply
246 posts