League of Legends (+ a bug)

League of Legends (+ a bug)

So... I've been playing lots of, even too much, League of Legends recently.

What's it? A free game. If you've played Defence of the Ancients, Demigod, Heroes of Newerth or any other "MOBA" games, you know what it's like. If you haven't played any of those, well... you control one character. He has four skills. With these skills, you kill the heroes your opponents control.
Except, you don't. In fact, you should start every game by killing weak monsters, because that way you get gold, and can buy better items from the shop, and kill those enemy heroes who didn't do this. Except, of course, if you didn't get enough experience and they have level advantage. You might've been doing fine alone, except the enemy team did the nasty by having three players sneak up on poor unsuspecting you.
So in fact it's a game about teamplay, optimizing the amount of XP and gold you get, knowing what skills and items to focus on, and about killing the enemy heroes. It takes lots of time to get good at it.

I can play decent tank, but I'm not that good at any killing roles. Even my damage-oriented mages and archers (Annie, Ashe) and up in support role with stun-assists but few kills.

Any way, one of the reasons I made this thread was the weird bug I got today. Has anyone else found themselves playing on a space level? In fact, it's just the terrain texture having become invisible and you seeing the background pic under the ground + walls. Still, it's a lot like a space-themed map, especially with those explosions. Pity there were no Corki's this game, or Astronaut Teemo's. 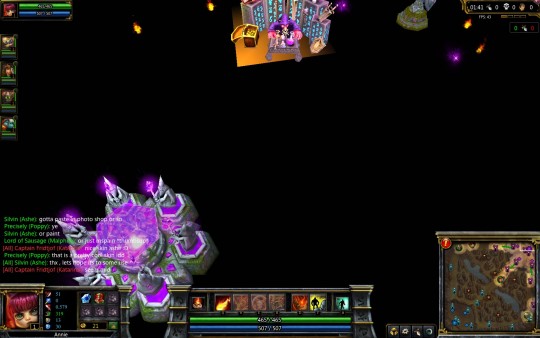 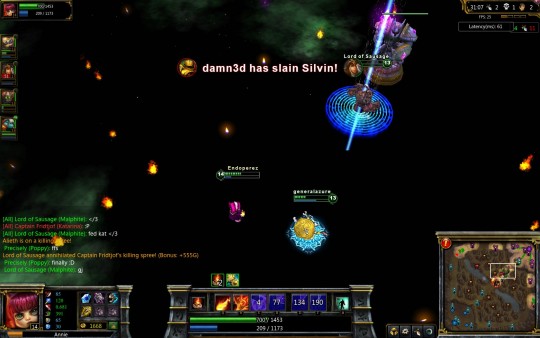 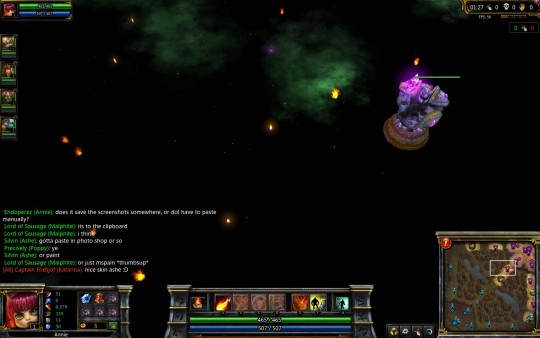 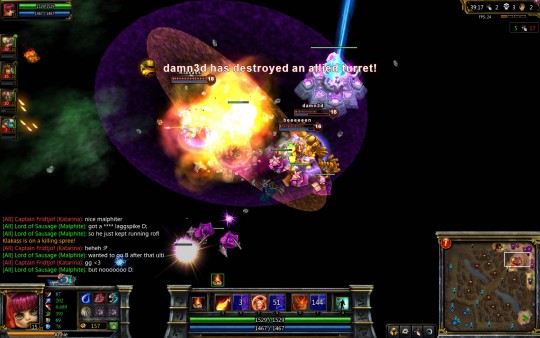 I've got that before, mostly when I've recently reinstalled the game. I think it's a common bug when playing on low graphical quality.

For me it happened when I set the Character Detail to Low, or lower.
See if that makes a difference for you. If not, just turn everything to the highest and work your way downwards.

If you're playing on the US server, feel free to add me once I'm online.
The name's the same as on the forum. I'll try to do the same with you.
Top

I got that when i played from my mac on VMware fusion. I just booted up bootcamp (LoL) (Double lol) And it solved it.

Whatever server you play on, add me if you want:
Precastwig
(Same for both)

Also i have a mate whos REALLY good at this, so if we play then he will carry us.

Oh yeah. It was that game with me body blocking every single grab.

I recently made an account on League of Legends, however when I log in the page does something, like if I had refreshed the page, my username and password disappear and thats it. I am on a Mac so I was thinking maybe that is happening because it the game isn't out for Mac yet.

It sounds like you're having problems with the webpage. Have you tried using a different browser?
Top

No I haven't, I'll do that right now.
Top

Well I tried three other browsers: Firefox, Opera and Safari. None of them worked.

Any other ideas?
Top

I recently found about a YouTuber, who does League of Legends videos, named lcsullla. (http://www.youtube.com/user/lcsullla) I've been sorta addicted to his videos lately. He has only about 2,200 subscribers and deserves much more. He does a really neat thing with friends of as well as some of his subscribers:

Tuesday night is viewer game night for my channel. I run custom 5 vs 5 practice games with YouTube viewers on my League of Legends friends list. Do your best, play to win, but most importantly have fun. You do not have to be Level 30 to play.

I do my best to invite as many people as possible. However, there are over 1000 subscribers, and only 10 spots in a League of Legend game. If you don't get an invitation, it's because there are several dozen other people also requesting the same thing.

Hope to see you there!*

*Taken from his channel page.
Top

And another thing, does anyone know when League of Legends is coming out for Mac?
Top

Chalky wrote:And another thing, does anyone know when League of Legends is coming out for Mac?

Its not, get bootcamp
Top

Chalky wrote:And another thing, does anyone know when League of Legends is coming out for Mac?

Its not, get bootcamp

Its not ever coming out for Mac?
Top

So how exactly do I get bootcamp and get LoL to work with my Mac? Is there a tutorial somewhere? (I'm terrible with computers.)
Top

Does it work well with WINE?
Top

Bootcamp is easy, but you will need a big section of your harddrive to use and a version of windows.
http://labnol.blogspot.com/2006/04/boot ... ws-xp.html