@ShinyGem. Hey thank you very much, i don't get alot of comments on my art sometimes. its much appreciated.

It doesn't douse my creativity to think that this could only be part of the game through mod community. However the stuff i want the particular creature to do, would be terribly difficult without significant modding for his game play. But whether he has Rabbit skills or custom mods, i'm happy with the design and that's really what matters.

And thanks for the info and the Universe, ill keep that kind of stuff in mind. Ive taken a look at alot of the stuff that came prior to my picture, And before doing so had even thought of alot of them. Such as the first picture where the character is riding on a hawk. Thats a wonderful idea and im glad to see im not the only one that thinks it would be cool if there were simply giant birds instead of bird people. and they ride them like horses or dragons etc.

Again if The Avian doesnt work out, i might just pull him into an original storyline or alternate universe for something, overgrowth or not. Because i very much enjoy writing stories, and some of my own creations feature some animal people. Maybe bird men are just another perfect fit? who knows still. im hopeing to model The Avian.
___________

And its a pretty new process for me, ill be useing Blender for basic modeling, and then Sculptris which i believe is good for texturing, and realy nice extra details. i dont have any idea how im going to do the wings because i want the feathers sort of separated. maybe some kind of invisible model piece and then i can make the wings just a texture? who knows.
Top

Fidchell, your alive! I like teh mecha bunny. The head is shaped very nicely, very acorn like. You may rejoin our ranks now that you have passed my test

Ageshero, I would encourage you to continue to develop the Avians further as their not being mammalian is no matter for mods. I made a raptor after all and someone said they could be invaders of Lugaru island (Awesome idea, srsly. Thanks, whoever it was. I can't remember who though, sorry)
They seem to be the perfect application for bows once they are modded in (It is a matter of when, not if). I think you'll get a +watch from me on dA since your art is pretty good. Also, I'm curious, your idea for producing the Avian model sounds vaguely familiar. Did you read some the old stuff I was doing with characters? I'm hoping that stuff helps some people someday, even if I never finished my tutorial. I'll definitely have to make a very in-depth step by step tutorial once I revisit my otters. And maybe I will revisit the fox some day and have them more closey resemble Ninjas' old concept. art...
Anyways, I hope you enjoy our little community here and roll out some awesome fan content.

EDIT: Forgot to mention. If you want to have feathers that extend off the arm bits as little alpha transparency fins, you won't be able to paint the texture in Scupltris. Sculptris will give you an error because it doesn't like having more than two faces attached to a single edge. You'll probably have to break the UV into a good pelt with the alpha bits separate and texture it with a 2d image editor. I would reccommend MyPaint or maybe GIMP if you haven't got Photoshop or the money for it.
Top

Hey korban3, I'm pretty new to the forums here. and i'm ecstatic that you liked my concept art thank you.

Sadly i've not been graced with informational tutorials or anything at this point to lead me in creating my Avian concept. Just the thrill of Overgrowth and the prospect of new frontiers and creatures. I do own Photoshop cs4 which i am thankful for having, its great for all kinds of stuff, but ive never really gotten into depth of Photo manipulation which i may need for the feathers if i wanted them. thing is all this gets convoluted with problems, i havent started quite yet, but i to my knowledge after watching some model imports.

Overgrowth uses transparency to determine shine on models? which is very strange, its an older video, 2010 i think, but i have know idea if it has been fixed... I imagine i should move this post to an Avian Specific mod forum. Anyways. Yeah, i dont know if overgrowth will like multi object models either. ( im pretty new to modeling in 3d, and i dont really have much more than one completed project, which is a mask with a strap that i planned on making for a friend, the thing never got textured and imported into the game it was supposed to be in.

But anyways, due to the earlier mentioned transparency i think separate feathers and conserving polygons is out of reach. I think Overgrowth goes a bit far sometimes when it comes to polys, my brothers pc has some frame rate issues, and he can even trudge through some of the heaviest of games. Skyrim, Crysis, Secondlife <_<... and rage.

If you have any tips for me at all, or information in the topic, let me know, id like to hear it. for right now im gathering reference images, and textures for the avian, and i will probably turn them to Gray scale and black and white for blending, color correct some stuff, and then once the model is fully done (textured in Sculptris probably) ill color him really nice and realistic, probably come up with Grey, Brown and Black. maybe a really wonderful Tropical bird color. like lime greens and the like.

Im starting to get overwhelemed with some other prospects to, like the fact that i will probably have to add more species of the same bird. This one is kind of like a hawk-parakeet.

I want to add 2 more i think. An Owl/Barn owl, (there stronger,) and a Mourning Dove/Dove .

They are all part of the same culture, but have there different stats. The dominant birds will probably be the one portrayed in the current concept.
Top

Yes, the character shader uses the alpha channel for specularity because having a transparent/partially transparent character is less useful than having a specular/partially specular character. There is a plant shader that uses alpha for transparency though, but I doubt it works on characters. Just a sec, I have a incomplete tutorial up on the OG Wiki on characters.
http://wiki.wolfire.com/index.php/How_t ... Overgrowth

You can access that without SPF access, so go ahead! It might help you a little bit. As for a dedicated thread for Avians, I'd say it is fine. I don't know if Freshbite would lurk his way out of Randomness to crack down on you or not, but I doubt it'll get anyone's panties in a bunch

The poly count can be a bit rigorous sometimes. When I did my fox, I actually just used one of Ninjas' existing rabbits and transplanted the wolf's head and tail onto it

A little bit cheap, but I just wanted to get the process done. For the otters, I made the head and tail from scratch, and manually webbed the toes (Yeah, I webbed the toes

). But you can go as low or high poly as you like. Getting the characters in is a rather tough process at times, at least for me. EdT got the rigging under his belt like a boss, but the rigging is what makes my otters crash the engine. So remember to take it one step at a time. You've got a concept done, so great! Now make the model. Then texture it. After that you can worry a out importing it to the engine.
Top

I dont know if im good enough to be marked as something special. But i go by sight, and if the model looks as good as i like it. then ill be sure to continue the project.
Top

That's what matters. If you need someone to tear into facial topology, I believe Endoperez would be perfect

While you're at it, you may as well insult Escrima and make a long belligerent post about how the longsword sucks because it has no defense techniques. Then talk about this new martial art you're working on that incorporates only super high and flashy kicks, and palm strikes to the elbow that can stop your heart. Mention how many street fights you've won with this, and how you're starting a self defense school for "inner city" people. Pepper your post with emoticons, and make sure to include two "winking" ones and a line of green smileys at the end of your post. Endoperez will love you.
Top

this is a sad one, Suicide isn't very good subject for a picture, but let's just say he is a vagabond who got hsi revenge on somebody, so he can finaly meet his loved one in the otherside without any regrets.

picture is bit of messy in some parts but i'm happy with the result.
Top

Saedz wrote: this is a sad one, Suicide isn't very good subject for a picture, but let's just say he is a vagabond who got hsi revenge on somebody, so he can finaly meet his loved one in the otherside without any regrets.

picture is bit of messy in some parts but i'm happy with the result.

Made me sad.
Top

I was goofing off in the alpha and this happened.

Haha, this whole thing just made me laugh.

This forum makes me laugh

@Saedz, yes, that's the one thing I would complain about the image, it's sad, too sad for my innocently-pure-animal-loving-eyes to handle. =x

On a brighter note, I'm trying to revert back to my more elaborated shading. Attempted to darken it as well, since it tends to be quite subtle, though they feel a bit forced to me when too high contrasting.

And on a side note, any tips on drawing/colouring the pupils and eyes? 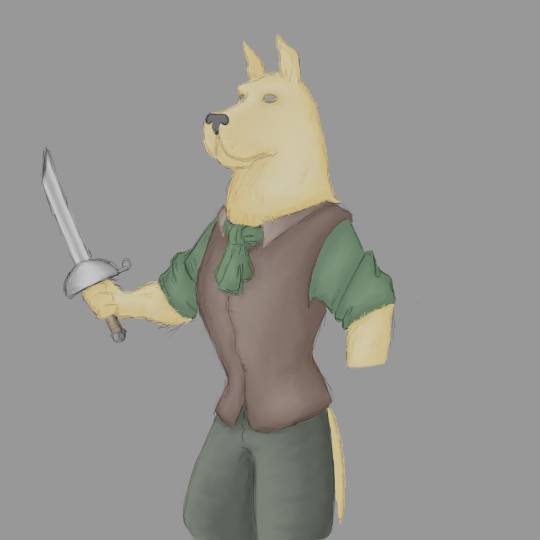