I didn't know if a dev was going to make a thread like this so i took the initiative and and made one myself.

We need a sticky or something for this where players can post their mods. I hope i'm not overstepping my bounds by making this thread, I just wanted a centralized area where i can find mods and mod suggestions for the time being. Hope that's cool with you guys. Go ahead and delete this thread if it's not.

I'd definitely start off this thread with a mod of my own to contribute if i could, but i'm not very skilled when it comes to messing with source code, nor was i ever. Sorry.

A in-game paper and pencil would be nice, and maybe being able to place more pieces.
Top

I think that the only thing this game needs is more different kinds of monsters and items. However, to retain a high quality, they would most likely need to be done by Aubrey and that means a slower progress with Overgrowth.
Top

•Small magnifying glass icon near cursor to indicate player is zoomed in.

•Ability to Flip and Rotate all game pieces.

•Ability to place a die flat without rolling it, when cursor is stationary.
*EDIT* Current method is to hold T before releasing.

•Ability to pickup multiples of any same class game pieces.

•While holding a card, hovering over other single cards for a short duration will add them to the bottom of your selection.

•While zoomed, moving the cursor should act like a joystick.
The center of your screen should be a moderately sized dead zone. After you move your mouse outside of that dead zone it will gradually move the camera, speeding up the farther you are from the center until max speed.

Bugs:
•When cards or other objects like coins are stacked too high, your cursor is hidden underneath them instead of always being on top.

•fullscreen -- if you tab out all the faces of cards and squares on the board become unreadable.
Currently you must exit the current game and enter a new game to work around this.

•fullscreen -- (1680x1050) the visible mouse cursor and actual selection are not synchronized. Currently you must tab out and back in to sync the cursor.

•fullscreen -- the cursor is not locked, with dual monitors your mouse will leave the window ignoring the border.
Top

I'm not sure is I better to post bugs here or create new toppic, but probably for now one toppic for all stuff like that shall be enough.

Bugs I noticed:
- graphical problems with objects when moving things near boundaries of screen: 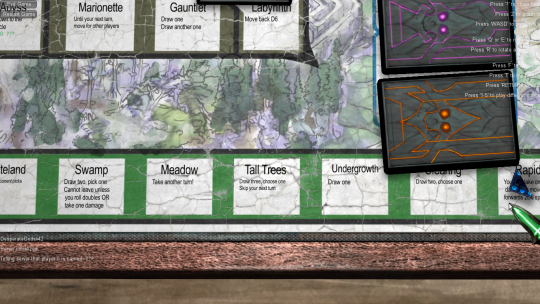 ;
- there are no boundaries for camera while zoomed: 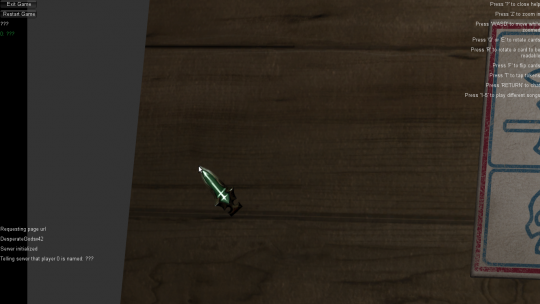 No boundaries while zoomed.

And by the way I must say that this game runs really reallly well on Linux using Wine without doing anythong special. I'm runing it with 'fantastic' graphics quality and where are no problems. It's pretty important for some people - like me.

- Serene Way is somewhat broken. As health and gold have very little impact on the late-game phase, in our four-player game, whenever Serene Way (where ANY player can pay one life to send the card back to the deck) was defeated, players were purposely suiciding to take the damage - purely to deny their opponents 8 points. The punishment for dying is not enough in the late-game phase.

Other than that, it's awesome! Good stuff chaps.
Top

I've noticed there is a gold coin icon on the cards, even though you're supposed to grab silver coins as a reward when you defeat a monster. I think this is just misleading so my first mod attempt will be changing this.

Also, Name tags on the cursors and player figures.
A way to keep track of turns, like clicking a next turn button which displays a message alert and shows a list on the side of the screen.
And 2 colored dice for each player color.

Some polishing suggestions:
1. Margins around the screen for the text.
2. Drop-shadow or outlines for the text to make it easier to read.
Top

I got an awesome idea i wanted for so long: Duelmaster

with these game mechanics Dualmaster and games like yu gi oh would be awesome, especially if there were win/loss animations for the monsters.
Out from the game mechanics, would it be possible to mod/make a game like this?
Top

Oh and definitely change the font on the board into something more fancy.
Nothing over the top, but something with serifs at least for the right medieval feel.
Top

The ability to flip through cards in a held deck with the scrollwheel would remove a lot of tedium, though I haven't checked to see if there's already a way to do this.
Top

Sphere applies only to items that "break" as for "crystal" I assume you mean the gem which refers to the non-existent "spells" Which if that's the case you're reading the card wrong.
Top

I'm doing some graphics modding, mostly adding eye candy to the game board, but I have no experience at all with unity.
I'm just changing the art assets so it should be quite simple right?

Edit: Can't get it to work properly with unity. The text isn't appearing and the graphics bug out when I zoom in. It's the same if I make a new build or run it in the editor.
Top

i guess some suggestions or fixes of such

*tabbing out removes all text on the board, and cards load a broken texture - as stated above

*more coins, you run out pretty quickly of silver coins when 4 people play.

*ability to rotate any item.

you could turn this game into a money thing too. have accounts (so people can be banned and such), and dlc stuff. like new decks or weapons, monsters etc. different board. if those dont come from modding.
Top

I know it's intended (or at least recommended) to play in a passworded game, but I'd like for the "reset board" option to be limited to the host.
My first game was kind of unintentional, I just hosted to see if I could get people to chat with in there. Mr. Roy just joined and started playing, and I joined in. Then about two hours later, some tit called "gays" came along and just reset the board.

Shuffling would also be much appreciated.
Top

Afason wrote:I know it's intended (or at least recommended) to play in a passworded game, but I'd like for the "reset board" option to be limited to the host.
My first game was kind of unintentional, I just hosted to see if I could get people to chat with in there. Mr. Roy just joined and started playing, and I joined in. Then about two hours later, some tit called "gays" came along and just reset the board.

Shuffling would also be much appreciated.

This. Only the host should be allowed to reset. It would also be nice if you could add a password later in the game, since anyone can join in and destroy the game without resetting the game (just throwing stuff around).

I know you're supposed to play with friends and a passworded game, but if you don't and just wanna play with strangers, you're taking a risk that your game can be destroyed/ruined at any moment.
Top
Post Reply
40 posts