The place to discuss all things Desperate Gods.
Post Reply
13 posts • Page 1 of 1

I thought I'd start a thread for card ideas, since I got a few myself and I'm sure others do too!

Special:
On victory: steal 3 silver from another player.
On defeat: lose 3 coins.

Special:
On victory: Draw one town card.
On defeat: Discard one equipment.

"Let me relieve you of that, it will make a fine addition to my collection.."

Special:
On victory: Add Possessed Dagger as an equipment.
On defeat: Lose all your equipment.

Equipment: When dealing damage to a player, destroy one of his equipment.

"Suddenly, the inanimate object started moving on it's own.."

Special: On win: You get 2 Silver coins from limbo pile

Special: Before the battle roll a die to see:
4 or more You fight against this monster
3 or less You put this card under the deck and draw 1

Special: You can buy 1 item from the Town shop, but after few of your turns the item breaks and get discarded.

Cowardly Jester, nice idea!
He should be worth a bit more though, since you need to roll 4+ and 3+ to win against him.

And for the demon, add a lesser roll for winning, that way he'll be really hard to kill.

I really like the fight again mechanic because it extends fights, but should be reserved for special monsters.
And something I'd like to see is boss monsters that require more effort to take down.

Combining the two you have this idea for a boss.

Special:
On win: Roll a D6, on 3+ fight re-animated corpse again.
On loss: Take 3 damage and each player shuffles one creature back into their respective decks.

"Let me bestow upon you, the gift of the unliving" - Necriphal

Special:
Infused Gem of Vigor counts as one extra Health. Discard this only after you run out of tokens.

"Enchanted with powerful magic, the gem pulsates with life"

Special:
On victory: Draw another card.
On defeat: Nothing. You don't even loose a hitpoint.

Special:
You must keep fighting this enemy every turn, until you beat it.
On loss: Don't loose a hitpoint, but instead draw another card and fight it.

I'm thinking obstacles are a safe choice, if you come up against an enemy you can't handle. And in the case of the boulder, you have nothing to loose, but you may gain a free point.

Special:
On victory: Move to any square on the board.
On defeat: You are sent back to town. (You don't loose your coins, but still loose a hitpoint.)

Special:
When used: Choose a player and roll two die; you steal as many coins from the chosen player, as the eyes on the die show.

Special:
Allows you to stop, and cancel, an ongoing fight. Must be used before the outcome of the fight has been decided.

Special:
If you roll less than 3, you loose another hit point.
On defeat: Put this card on the top of the deck.

Interesting card ideas! Some of them sound fun to draw. I made a random card mockup. Should do more to improve my painting skills:

Special: Spend 4 silver to draw 2 town cards and pick one.

Special: Pick and fight against another player.
On win: Take this card.
On lose: Give this card to your opponent.


Vrav, that card looks awesome!
Wish I could draw like that!
Top

I like some of these Ideas. And that card you made looks great and fits right in with the aesthetic of the game. Would love for some downloadable cards to add to the game. Or maybe pitch some to Wolfire, maybe theyll add them as a patch or new version of the game.
Top

Heres a few of mine; I'll edit my post as I make more. 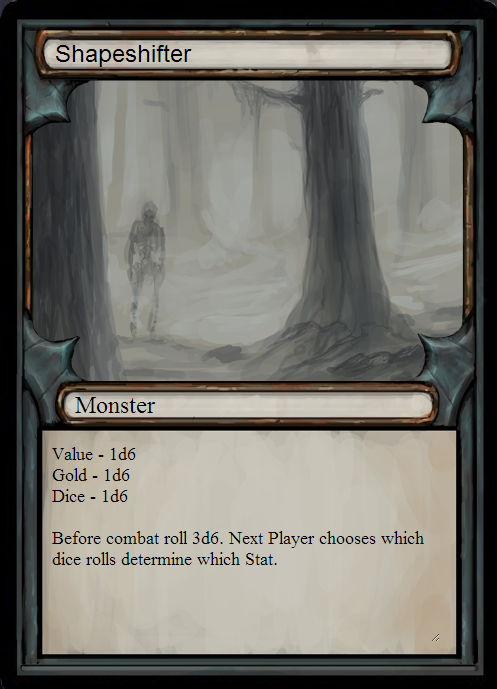 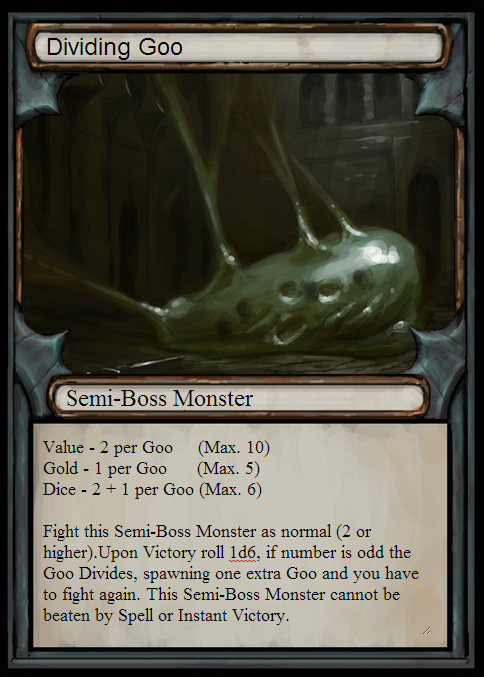 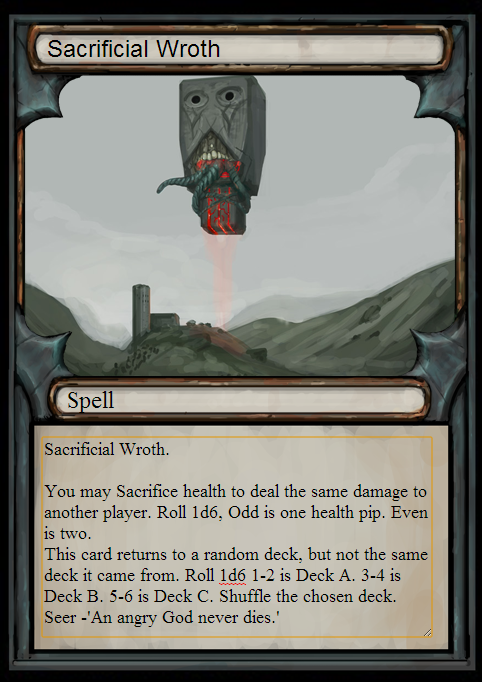 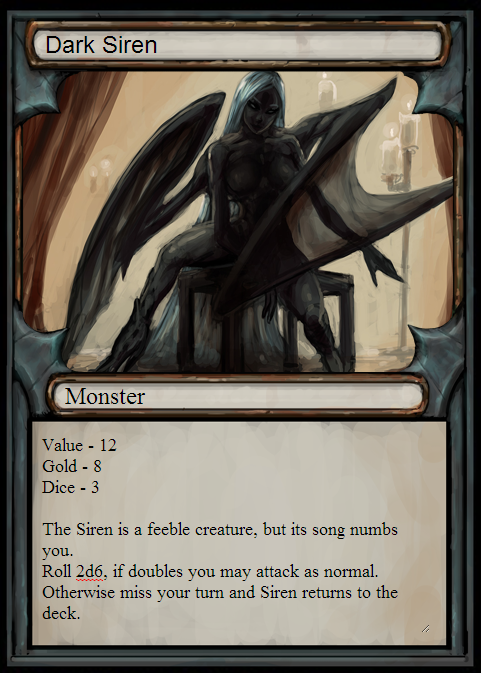 Some cards from our local non-distributive kitchen rpg focused version of Desperate Gods (we are in love with this game, and this platform). I think art is from mtg cards by wotc(no copyright infringement intended), I have to ask the guy who puts the cards together.

Special: On win: You may Pay 1 life to equip Wild Steed.

Equipment: You may move using the total sum of both movement dice.

Whether it is 'intended' or not, using another company's copyrighted art is still breaking copyright.

I think this is going to become a big issue for DG mods in the future. What is the best way to go about rebuilding a game layout without actually breaking copyright?
Top

Whether it is 'intended' or not, using another company's copyrighted art is still breaking copyright.

Well, that depends on the company and their terms to be honest. That is why I included non-distributive in description.. And I was told just now wotc does not even own copyrights on art of their cards.

But besides the point, you are absolutely right, it is a problem to get new good looking content into DG without encountering problems along the way. To use art in mods modders would have to
a) get an artist or draw themselves.
b) contact artists about their already done work, asking for permition. I am pretty sure a few artists would mind you featuring their fantasy work in a free board game if you credit them
c) use copyright free art or art with flexible terms of use (non profit, etc)
d) buy stuff?... but why would you.
Top