You'll find that in this game, kerbal pilots are the second most expendable resource on the face of kerbin.
Top

Jacktheawesome wrote:Awesome! Is that your first time, or have you landed there before?

On previous attempts, I would jettison the third stage somewhere in the moon's orbit so I could control the lander easier. This time I actually used the third stage to descend. Then when I thought I was getting close I jettisoned the third stage. This way when it hit the surface of the moon I could use the wreckage as a visual indicator of how far down the surface is from my lander. (because I know how big that stage is with respect to my lander)

I realized I can rotate the camera down and it will touch the surface if i zoom really far out.

This way I can guide the rocket down from a surface POV. 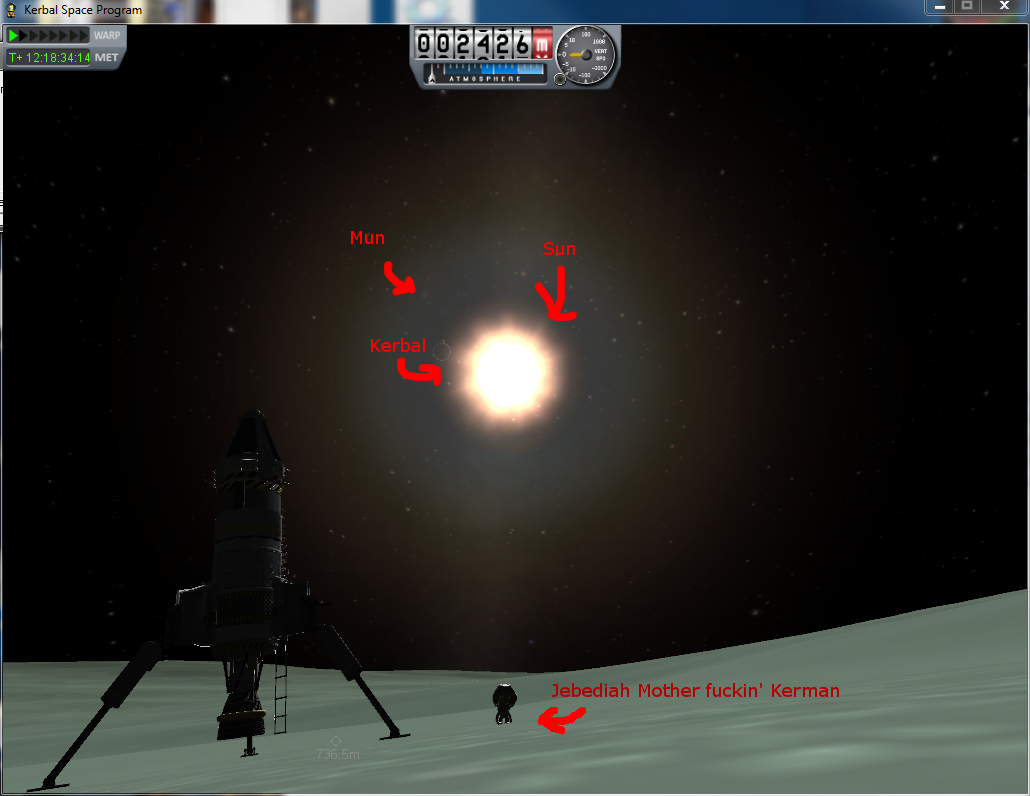 I believe I can make it out to duna or something if I am able to perform a slingshot manuver around the mun or something.

I'll have to try it sometime.
Top

Awesome! That always feels good, to finally get past something like that. I'm assuming you're like me, and have shadows turned off. If your computer can handle it (mine can't), I've seen people use them in videos very effectively to judge the distance. My method has been to slow to a point where I've killed all lateral velocity, lock my ASAS at vertical, and then just hover over shift and x and watch my velocity like a hawk. I know a lander can withstand drops under about 12 m/s, so whenever it hits 8, I just burn for a second to kill it, and rinse and repeat until I eventually touch. I hadn't thought of putting my camera on the ground.


Assaultman67 wrote:You'll find that in this game, kerbal pilots are the second most expendable resource on the face of kerbin.

Also this, unfortunately. I hate to admit it, but sometimes on rescue missions when I don't feel like getting them out of the capsule before launch, I just get into orbit and...deorbit the excess two.

Kerman on Kerbin in Kerbal.
Top

Can you name one Korban and send it on a bad-ass suicide mission?
Top

Fffuuu-
Well, maybe you'll get lucky and find the right Kerbal for that suicide mission.
Top

How is that pronounced? I've always wondered...
Top

Korban3 wrote:Fffuuu-
Well, maybe you'll get lucky and find the right Kerbal for that suicide mission.

I know just the guy for this mission ...

That is exactly how I picture him. I have no idea how people keep getting the original three; I haven't seen Jeb since I played the demo.
Top

So me and jeb decided to make a space plane.

Everything was going well until jeb decided to try "ghost riding the whip" at supersonic speeds.
Top

Haha, what a boss. I feel like less of a man just by staring at his glory.
Top