The place to discuss all things Receiver.
Post Reply
11 posts • Page 1 of 1

So I had the chance to play Receiver on my buddy's computer for a few hours and I like it so far, but definitely not easy. Being as careful and tactful as I could, but still got insta killed by a flying tazer that was too quick for me. So a quick idea I felt like doodling was a stun baton type weapon that used battery pack ammo for disabling a robot, or if there isn't any ammo, a club to buy you some distance.

The ammo could be scarce as the idea is that with a cartridge, you could one-shot-kill a robot. You could either start with the baton and without the gun or vice-verse. 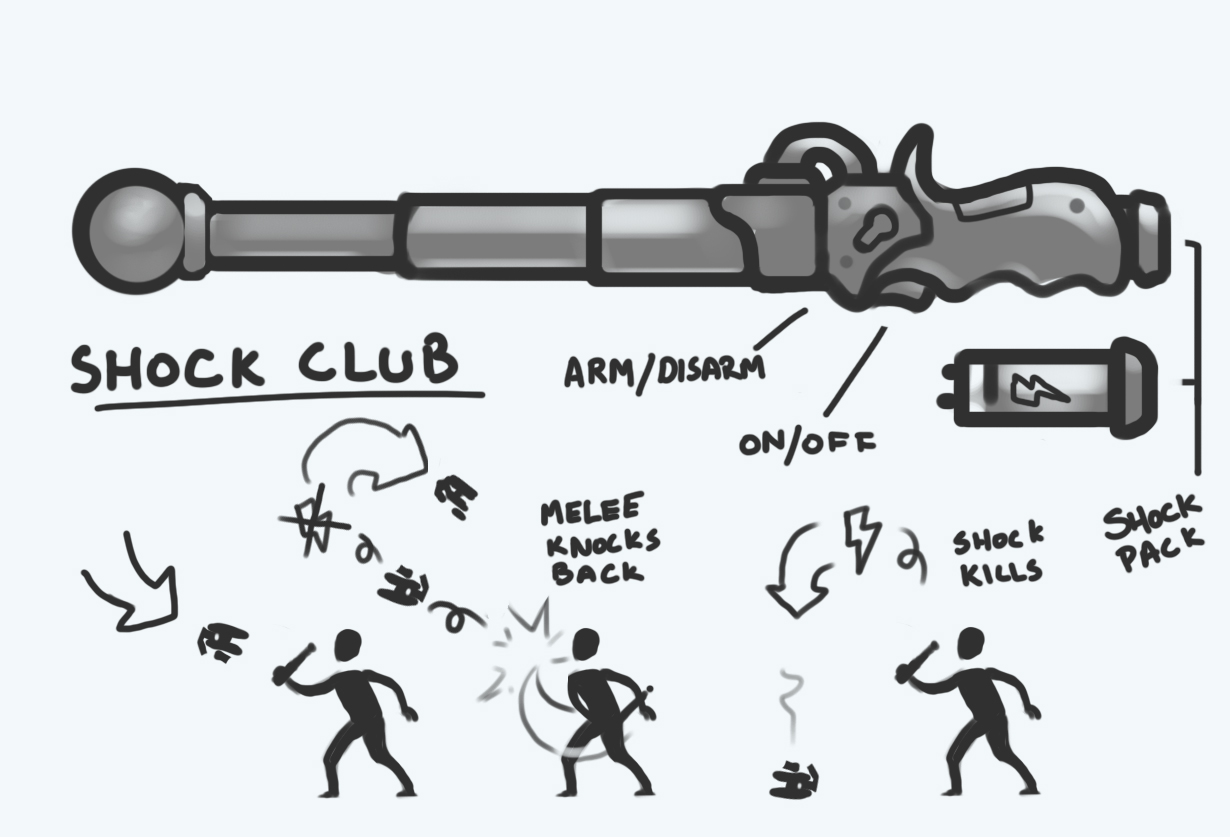 The game has a really interesting mechanic to it that I would love to see applied to more items.
Top

looks like a nice concept. I'd love to see that ingame

Awesome idea. This would be a cool addition, for sure, and an appreciated one at that. Those flying tasers are a pain in the arse.
I'm still a little scared that Aubrey had made two more enemies in which one was a ground turret with wheels and the second was an air turret with a gun.
You know what? I'm really glad they didn't spend longer than 9 days on it, Because then I'd never have found more than two tapes in one go.
Top

I have to disagree. The whole core concept of the game is the advanced gun mechanics and how the realism of handling a real life gun can be fun in a game. Having a made up weapon introduced exclusively for close combat undermines the entire point of the game.
Top

You know, i'd be fine with the made-up melee weapons. But if that's not an option, I think something like a real life taser would work. It's fairly short-ranged, and uses cartridges.

(While unecessary, the laser sight would be a nice addition

How about a water squirt gun? Make drone wet, then tease it to buzz you and it electrocutes itself.
Top

bgr wrote:How about a water squirt gun? Make drone wet, then tease it to buzz you and it electrocutes itself.

Along with you?
Top

I'd really like something as simple as a penknife just to cut the wires on sentries that I've shot the camera out on. Seeing one spinning around still is just too unsettling.
Top

Azarus029 wrote:You know, i'd be fine with the made-up melee weapons. But if that's not an option, I think something like a real life taser would work. It's fairly short-ranged, and uses cartridges.

A good example would be the X-26:
(While unecessary, the laser sight would be a nice addition

Umm. There's one problem with the idea of a taser in the game. How would a taser work on a robot?
I do think it is a cool concept though.
Top

this idea is awesome... but i think that the stick should look like something homemade (the model).. and you will have some chance to spawn whit it.. (like aways)
Top
Post Reply
11 posts • Page 1 of 1