I feel like, in all these high powered longarm mods, the core idea of Receiver has kind of lost its way as a survival game...

Plus its screws with some of the tapes, which specifically state that you have a handgun, although one tapes still refers to the gun as an M1911...
Top

The core idea of receiver is not being a survival game but offering detailed weapon handling mechanics. Furthermore the Receiver story itself is rudimentary and if you criticize, that the additional weapons are not mentioned in the tapes, then you should not forget that the glock and revolver got deliviered by wolfire games themselves also without mentioning them.

However if you don't want to play with a longarm weapon, then you can just decide not to spawn with one or you don't even use the mod in the first place since nobody forces you to do so. Be a little grateful for all the work and effort Josh puts into it.

Now to the double-barreled shotgun:

This is actually quite difficult to do, because you can't use the existing gunscript since it doesn't feature this mechanic. As far as I remember, a double-barreled shotgun features not only 2 barrels but also two triggers and 2 hammers. This means that you have practically two guns in the scene but they depend on one another, so reloading one barrel means automatically to render the other barrel not operational and vice versa. I already expressed, that I'm not familiar with scripting but I guess this means a lot of IF-Loops and addional key mapping since you pretty much double the available gun mechanics.
Top

Some double barrels only use the one trigger.
Top

chitoryu12 wrote:I actually still haven't gotten the bolt-action rifle, and it's not available on the weapon select menu option. I know that I installed the update after the base files, so it should be in there.

You extracted the update in the wrong place. All files contained in update "16.11.2013b" must go in Receiver_Data and not just in the main directory.

Is this an educated guess or definite knowledge? - Every double barreled (to be more specific side by side shotgun) I know has two triggers, no matter if the hammers are located outside or inside - I think you are refering to an over-under shotgun, which has also two barrels but its behavior differs from the side by side shotgun. An O/U needs a bigger angle to open the chamber for reloading, thus taking a bit more time to reload, however handlingwise it makes up for this disadvantage, since O/U barrel position supports the natural hand shape more. Also O/U is capable of firing a quick sucession of 2 shots while side by side can shoot both barrels simultaneously (ofc with a low controlability). So next time a bit more precision in the request would be good.
Top

I was referring to O/U and assumed that it applied to side by side as well. A quick google and yes it does, there's the Winchester Model 21 shotgun as well as a few others. Unfortunately in formation is hard to come by, they're talked about and i could find pictures but i have no idea whether the picture is actually a picture of one. However the Winchester Model 21 is real as far as I can tell. That is there's multiple pictures of it, online gun auctions etc.

So a modder would only have to create a way to do two triggers if they wanted.
Top

I actually think some of the long arms heighten the "survival" feel - have you tried playing with the bolt action rifle? Having to cycle the bolt is TOUGH when a drone is trying to fly down your throat.
Top

P.S. This would have been so much easier had there been Steam Workshop support for Receiver.
Top

Hmm, are you sure you installed it correctly? Like copied the base files into receiver_data then the update over those files? If that is not the problem, did you start with the most recent update (RC7)? I made the mod with Win7 64 bit so that isn't the issue. The other guys problem was solved by simply sending him the build, it never actually got resolved. If you can't get it working I suppose I can send you a temporary link to the build.

P.S. This would have been so much easier had there been Steam Workshop support for Receiver.

Yes, I had plans on making the next build include mac & linux, I vaguely remember hearing Unity can only build to linux with linux so that may be out of the question, but I think I'm able to do mac. I don't have one so I won't be able to test it though!

Hehe there's plans for a lot of things, but I need models to be able to add anything. I'm not that good at modeling and it's not really worth my time to try to make them for this, but since most common action types have been scripted I can add most models I find. I've gotten lazy recently and have taken a small break from working on this but there will still be updates, there's a really annoying issue with one of the guns from RO2 I've added. To answer your question directly though, yes, I'd add them if I had decent models available :P
Top

Josh707 wrote:Yes, I had plans on making the next build include mac & linux, I vaguely remember hearing Unity can only build to linux with linux so that may be out of the question, but I think I'm able to do mac. I don't have one so I won't be able to test it though!

If you've got Team Viewer or a Skype, I can totally let you test it/I'll test it for you on my mac if that speeds up the process! I also really appreciate the quick response time. Best of luck with converting this mod to an OS X version as well as adding future gun models.

P.S.- Wanna know what would be really fun to code? An RPG. It has no context with the game whatsoever, I know, but wouldn't it just be fun to just blow those damn drones out of the sky. And with the weapon selection menu you added, no one will have to use it if they don't want to. But since that would require adding a splash damage system and a bunch of other things, I think it would be easier to add an LMG of some sort. Again just for the lols, perhaps you could add something like an M60? I'd like to see you take on the animation for that puppy.

EDIT: Even the M60 maybe tough just to even implement into the game since I wouldn't know how you'd manage reloading individual rounds since it's belt feed, and that would require far too many bullets than normally available to the player. (I guess if you were to add an LMG, it'd have to be magazine fed.) I don't know, I feel like the M60 wouldn't really be as fun as I initially pictured it to be. A semi-auto rifle, maybe? Like an M39 EMR?

http://www.turbosquid.com/3d-models/m39 ... ree/758730
But this one just looks badass, pretty sure this model has nothing to do with blender though.

Also I really liked your suggestion for adding attachments to the guns. I also like the under-barrel torch idea. Perhaps, you could add under barrel laser sights as well, to help aim from the hip? Or add the use of a grip on some guns to reduce vertical recoil, perhaps even a bipod (for the M39 EMR especially) that would decrease the sway or recoil of the gun in the crouched position (since you can't really go prone)? Or some custom red dot sights or scopes? Just brainstorming here...
Top

Josh707 wrote: Hmm, are you sure you installed it correctly? Like copied the base files into receiver_data then the update over those files?

What happened was that I was stupid and didn't actually copy over the actual executable from the first mod. I did everything else though. Anyway, it works now, so thank you!
Top

i have a small request, well not small but it won't require custom animations im pretty sure it should just use the standard double action revolver animations and it would be very much appreciated, 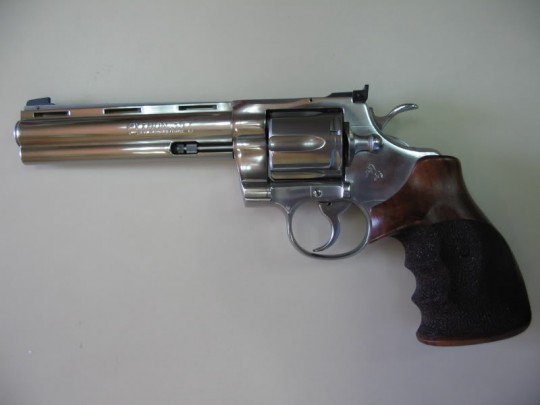 a 6 inch stainless steel 357 magnum colt python with wood grips. it would also be nice if was one of the guns with higher damage.

and as for the double barrel don't do a coach gun, do a "26" barrel with internal hammers like this one

only thing i could see being hard to do is the animations for the opening lever and breech and somehow making the gun fire both barrels seperately, and keep in mind a double barrel with internal hammers cocks by opening the breech so there is no cocking mechanic required just make it somehow cock when you open the breech. and in the future it would be awesome to see a ak 47 and a m16, but for right now this is awesome Good work! , Ps if you wanted to do some invisible select fire mechanic for the double barrel that would work to i think. Good luck

Hey sharing some modelling, not sure on the scale, some of you are using blender so when its done I'll export as an obj and yea, hope you like it so far. 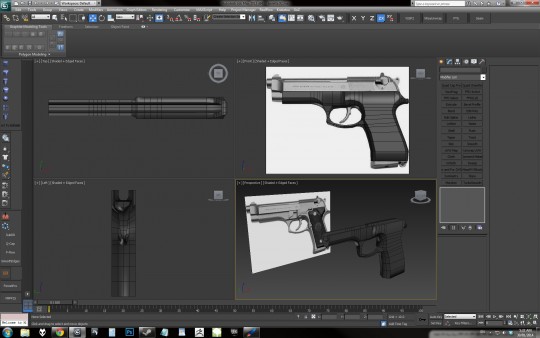 Looks pretty cool. I can't wait to see it in the future
Top

I did a good majority of it and sending the .obj file. hope it serves it's purpose in game.