Hi guys. This is my first post here so I thought I would share a piece of fan art that I made.

Sorry if this is the wrong thread, it's the only fan art related one I could find.

As you can hopefully tell, this is my interpretation of what a beaver race would be like in Overgrowth. The reason I chose beavers is because, well, I'm Canadian and beavers are one of our national animals.

I imagine the beavers to be the great builders and architects of the Overgrowth world. They are skilled carpenters and stone masons, and are known to have built some of the most sturdy and ancient structures that dot the landscape. They are not particularly fond of fighting, but when forced to, their style is extremely defensive. They are one of the only races to frequently use shields in combat.

A couple of notes:
- His necklace pendant is a stone carving of a stylized tree stump, as view from above. I forgot to mention but they are also great lumberjacks, and tend to cut down a lot of trees. The tree symbol is very prominent in their culture.
- While this character holds a hammer and a set of nails in his belt, the beavers in general are not the most skilled metalworkers around. The dogs are much better at this, but the beavers would prefer to build a nice house than a sword any day.
- While stereotyped to be weak and timid, beavers are actually very heavily muscled for their size. They need it to do all the heavy lifting and manual labour that is involved in building things.
- This guy would probably be some sort of npc in the game, who might give you missions or something like that. I don't think beavers would be very fun to play as.

Oh yeah, and I wasn't sure whether or not I should give him a tail. as I don't recall seeing any other Overgrowth races with tails. However, since the beaver's flat tail is one of its most distinctive traits (along with it's webbed feet), I decided to keep it in.

Cosec wrote:Oh yeah, and I wasn't sure whether or not I should give him a tail. as I don't recall seeing any other Overgrowth races with tails. However, since the beaver's flat tail is one of its most distinctive traits (along with it's webbed feet), I decided to keep it in.

I'm pretty sure tails are in. I'm not an experienced character modeler, but I've noticed that a short tail that's hardly noticeable in-game can easily be left out. Turtles, bears and rabbits have very small tails, and they're clearly recognizable even without them.

Other animals have been consistently drawn with tails, such as this rat timelapse.

I really like the tree motif. Did you come up with that yourself? It has promise, I bet you could make it into an actual necklace.
I like the colors of the piece. You left the feet undetailed, which is a bit of a bummer since that would be another unique part of their anatomy. He's very hunched-up though, would love to see one of these working somewhere, or leaning into something after work. Now he looks like he's asking for a raise of his salary!

I still like it very much, though! And I'm nowhere that good a drawer or colorist, so you can take what I say with a grain of salt.
Top

That’s a truly fantastic picture! I took a look at your DeviantArt phage and I must say you got a superb gallery!

Here is the last fan picture I am going to post here for some time, as I don’t want to give the impression that I am spamming the tread Aperson4321 wrote:Here is the last fan picture I am going to post here for some time, as I don’t want to give the impression that I am spamming the tread

Nice name for the image, and seems like a success too! The only part I'm not sure of is where the wall turns near the gate; the outer turn seems to happen a bit later than the inner one.

I wouldn't mind it if there was a general art thread. In fact, I almost started one few days ago. If you feel like posting something and getting comments, while this isn't the best place and I'm not the best commentor, I'd be glad to join. Could post some of my own works too, bad as they are.
Top

First time in this thread.

Quick painting of a desert fire.
This is nothing compared to the other stuff here, all your work is awe inspiring.
Last edited by Spinnacre on Wed May 05, 2010 11:51 am, edited 1 time in total.
Top

I made a fan art group for Overgrowth on DeviantArt. I just solved the problem with the options being turned on the block new members so feel free to join now. All art should be automatically approved.

I weirdly found no other Overgrowth groups on DA so that’s is why I made one.

What do you people think about this?

Here is the link for the group

http://overgrowth-fan-art.deviantart.com/
(yea the avatar I made suck, plx make a bette one somebody)

I like the idea of a DeviantArt group.
I might even contribute with something I create, sometime, in the future... maybe.
Top

ispired by my dog's blue eyes:

here come the socialists from the northern territories...

I suggest Overgrowth incorporate a clan that believes in peace. brotherhood. and equality. as a counterweight to those capitalist cats...
Top 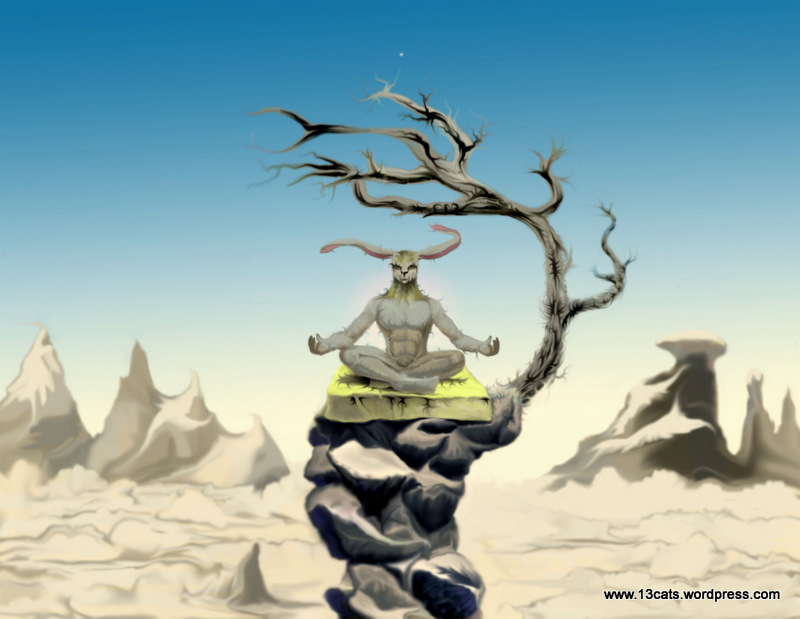 Now that's fucking committed. That's what you want. Well done to that rabbit, I say.
Top

No need for quotes in my opinion. They're paintings just as much as gouache or acryl and other tactile painting mediums. The biggest difference is that there's no original, so the economy work around quantity instead of highly-priced, unique physical copies.
Top

This thread is so awesome! Some of the art in here is amazing-- I guess I am going to have to try harder to keep up with you guys