The place to discuss all things Lugaru.
Post Reply
279 posts

(I'm actually Silb. See the edit at the end of the post for an explanation.) 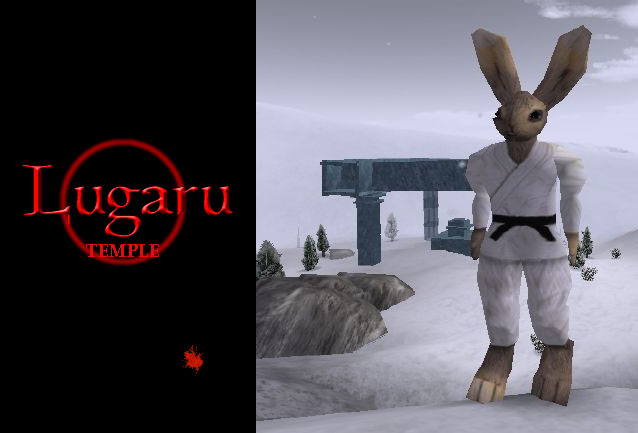 It includes 31 maps, 85 rabbits and 15 wolves on the receiving side, plus 4 different player characters. All this wrapped up in a large campaign, complete with scenario and dialogues.

Sven is Turner's twin brother (or maybe just a cousin, he was never very clear on this). He's been training in the desert (see my previous map pack) to become the new master of his Temple. He has just come back.
The story starts right in the heat of things, and what's happening is only implied by the dialogues, not flat out explained. But you'll figure out very quickly. The scenario is really simple and just a frame for the levels.
Last thing, don't be too upset if there are small glitches. The level editor is unsupported and reliably crashes when you stare at it the wrong way.

WARNING: PG-13 rating. About 100 violent deaths on screen. (Also, a relative of the main character used the word "bastard".)

Some screenshots (you can also watch all of them in one place, if you've got broadband):

Little explanatory note: I gathered most of the maps I've created over the last six months and wrapped them in some scenario. I intented to post this before leaving, but was short on time. I've found some really helpful editing tricks, which I'll explain if someone else does a serious attempt at a campaign.

Oh, and I found a limited web access. I'll be able to pop up from time to time.

EDIT: Damn, I posted this on my alternate account (I popped up once a couple weeks ago due to troubles with Lugaru sound, but didn't use my regular account because I didn't want to explain that I wasn't back and not going to read other posts. I didn't realize I'd be consequently logged as Jack and not Silb when returning to the forums. Well, so much for my bright ideas.)

License: everything in the Temple campaign is free under the creative commons license, without need for attribution. This concerns all maps, the campaign file, and the following textures: Desertcl, GiTop, GiBottom, GiTeared, mask. The other textures are modifications of proprietary assets.
Last edited by Jack on Mon Apr 10, 2006 9:19 am, edited 5 times in total.
Top

Re: A New Campaign!

Jack wrote:EDIT: Damn, I posted this on my alternate account (I popped up once a couple weeks ago due to troubles with Lugaru sound, but didn't use my regular account because I didn't want to explain that I wasn't back and not going to read other posts. I didn't realize I'd be consequently logged as Jack and not Silb when returning to the forums. Well, so much for my bright ideas.)

Sorry to be such an idiot, but how do I actually download it? There doesn't seem to be a download link on that rapid share page without me signing up to something.

EDIT: I managed to get to the download page, except after the ticket timer has counted down and I have chosen a mirror, I get an error saying that it it invalid, you don't think you could send me the file directly could you? Because I am really really anticipating playing this campaign after slaughtering the first one!

My Email should be in the button after this post.
Top

The rapidshare presentation can be confusing. You don't have to subscribe to anything to download. Just clik on "Free" on the bottom right of the page. Then wait about 20 seconds (1 second for every 0.1 Mb in the file). You'll be asked to write a number shown on a picture, to avoid computers to automatically ask for downloads. Then the download starts.

This will all be made easier if someone's willing to host the file.

EDIT: The download works fine for me. I've just tried it. I've emailed you the file.
Top

Wow, I've never seen someone do a new campaign. That's really great. Just one question, how did you get the dialogue to work? Whenever I edit a dialogue text and enter director mode, the screen freezes and it kinda gets all blurry, (motion blurry, but I don't have motion blur on) and when I go into console mode the screen turns bright red, and I can't do anything.
Top

If you have a Hotline client, you can log in to [url]hotline://mocha.mine.nu[/url], put it in the Uploads folder and I will mirror it.
Top

This campaign is the wicked sick dude!!

In many ways this game surpasses the original one. It has much longer missions, more content, better deigned levels, a shift in seasons, all sorts of things. The dialogs were complete and thorough and it was cool that you would assume the role of different characters. It had some great placement of structures and bunnies, you could really imagine just arriving at the end of a war (trees flipped sideways is awesome). I traveled that beginning sneaking level and was all like, "dude! That wolf ate a bunny!" There is alot of things this game does that hasn't yet been done in other maps. The levels are designed to the situation (there are geat sneaking, outdoor, indoor and huge fighting levels. That last of the levels looks really awesome, you're in like a new dimension, really crazy). Even the different main characters are proportioned to look differently (at least it looked that way, Shan looks big) and it really worked out well (new sword texture).

This is really a great a great campaign, every one should try it. In fact if you aren't on the team now, you should deffinately be one of the level designers for Lugaru 2. Great work man.

Oh man, that looks amazing. Hopefully if I finish the wiring for my computer in comp sci, I will have time to play this tonight.
Top

Thanks for the hosting!
But David, the file you posted contains the campaign twice.

I can't even get past the second level (well third, but second with fighting). All the jumping around to get places is awesome, but I can't seem to figure out how to get certain places.
Top

You need to use the ramp on top of the ruins to jump to the bridge leading to the last platform. It's the Super Mario Land level.
Top

I finally figured it out and on the next try afer that I beat it. That is some crazy hard jumping. There is about 1 milimiter of leeway. Pretty Awesome stuff I look forward to more playing. Thanks Silb.
Top

There is some weird stuff with Turner and April when you go to the Temple of Wind for the second time. I can't really describe it very well, if this is a bug that you want to fix tell me and I will do my best to explain how to recreate it.
Top

It's there the first time, too.
If you look at your radar, there's someone off to the right of the exit gate - but when you get there, there's only a shadow on the ground. If you talk to the shadow, you get the Turner/April dialogue from the first level of the regular campaign, and you and the invisible April teleport over to the Air shrine.
Top
Post Reply
279 posts