by NinjaRabbits
I should start thinking about improving on MY scores.....

by KARNAG
Its my 1st level challenge 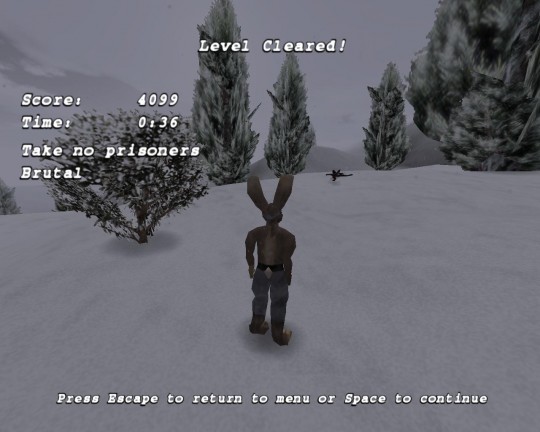 by Untadaike
Nice! Better than me

by kehaar
Hey, wait! Where's that guy who posted that awesome "All challenges in 10 minutes" video on youtube?

I guess he never got around to reposting here... too bad, it's a very good show.

I wanna know how people get such high scores and quick times (anything under 15 seconds is quick for me).

I also experience the same level of inferiority when it comes to getting times like 6 seconds but I suspect they are using things like ninja knife throws and leg cannons into other bunnies, things that will generally chop off a whole lot of time. I never try to finish levels as fast as possible, though. I just take my time and do what I think is fun in terms of smashing rabbits to death.

haha! i am exactly the same! level 5 and 10 are great for that. knock them off a super high fall and then just laugh!

Got level 14 again (destroyed my last one). I've got a video of it, too, so I'll add that as soon as it finishes processing.

ok, here's the video. Not the cleanest run, but hey, it got the job done. And you can tell that by the last wolf, I was getting pretty desperate.

Edit:
Also, Just got the Challenge 3 score this morning:

by h2ostra
Check it out. Just edged out #11, too. This after a devastating round in which I completed the level 1 point shy of the record.

Here's the full thing, so you can see where I'm at.

by Untadaike
Since that article is categorized under "Jeff was Bored", it makes me think that it doesn't exist. But I still have hope, and I still play Lugaru now and then in hopes that one day, some day, I will find it. Lol.

by NinjaRabbits
Supposedly you need an exact score on each level... God help us all.

by Untadaike
I bet it actually exists, I wouldn't put it past David.

(damn, 3 points shy of the best score ever for a challenge level)

Playing on my other computer so that's why the time the time is back down.

And I know no one updates it any more, but whatever.