The place to discuss all things Lugaru.
Post Reply
51 posts 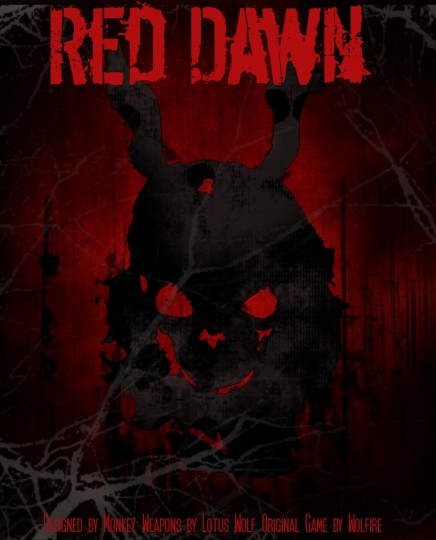 The Red Dawn Campaign is currently at a stage in its development where the basic story map and textures are set. It still requires being assembled together into a free-flowing campaign setup, with dialogue.

What the game consists of so far:
Around 20 - 25 maps (Don't expect an extremely long campaign)
Every enemy you face is armored and armed.
about 20 wolves proportioned to about 3 times your strength
Very few maps do not reach the max of eight foes.

For those of you curious I am including a basic Outline of the story:
Our hero is torn in character after his family is slaughtered by a couple of passing UWRS soldiers. He turns his revenge into a guerilla terrorism rage against the oppressive government, planning to eventually kill the tyrant himself.

Story placing this series of events on the Lugaru timeline:
After the last tyrant, the island of Lugaru had been successful in maintaining peace for three long years. However, the government which had been established lacked stability in fear of another oppressive government. Food was scarce, and the people feared that the wolves would return. In october of the third year, the revolution began as a small group of citizens assaulted the king. The overthrew him and banished him from the land. The new leader built plantations on which food was grow behind towers to defend against raiders. Wolves were rarely seen, but rumors spread that packs of wolves, dressed in unifrom, broke into the homes of those who favored the old ways. The people were forced to work, and government officials priority in the food distribution, often taking excess, leaving the people to starve once again. The leader had many speeches promising better times, but he was never seen without groups of guards, and never seemed to make any progress. He also had speeches condemning those who would fight against his cause...

The link blow is one of these speeches.

If the campaigne is HALF as good as the trailer, it'll be fuuunnn! I can't wait!
/girly squeal
Top

Whoa is all I can say.
Top

That looks freaking awesome!!! Do you guys need some music for it? I have some ideas that could really fit in that world...
Top

I hadn't really thought about music for the game... It's a good idea though so the help would be appreciated!!

Also if anyone knows how I can change the loading screen and the file type it's saved under, that would also be of great help
Top

Cool, if you have any more screen shots, or anything I can get my hands on, it might help with some more concepts.

On a side note, does anyone know ways to mod the music in Lugaru without just replacing the current music files? I don't know if there's a way to specify which tracks would be used when loading a level. If that's the case, we are basically limited to 3 level tracks (based on desert, grass, or snow, I think), 1 combat track, and the title screen music.
Top

Very Nice! If you mean the fiery loading screen, then it's the Fire.jpg image. You can't change the format, and the effects will work on the image you replace it with in the same way they work on the current one. It would still be awesome though.

Glad I was able to help with this, you did get all the weapons, right? Would you like me to buff up the textures?
Top

ariehl wrote:On a side note, does anyone know ways to mod the music in Lugaru without just replacing the current music files?

Currently, there is no other way.

I don't know if there's a way to specify which tracks would be used when loading a level. If that's the case, we are basically limited to 3 level tracks (based on desert, grass, or snow, I think), 1 combat track, and the title screen music.

This is accurate. Note that you need to match the format precisely (codec, bitrate etc).

I can't for the life of me open music2.ogg though. Dunno why. Some oggs in the Sounds folder I can't open with Audacity for some reason.

Edit: Doesn't mean you can't replace music2.ogg though - if it's the same format as break.ogg, you're fine.
Top

Lotus wolf, I did receive all the weapons, you don't need to worry about the textures, because i have already taken care of that, also your advice on the loading screen worked, the only disadvantage is a series of white lines across the screen, but that does not really bother me, and it has the effect i was looking for, thank you.

rudel_ic, would the length of the music have to match as well?

ariehl, what kind of screen shots are you looking for? just of the maps, or actual gameplay?
Top

Monkey wrote:rudel_ic, would the length of the music have to match as well?

So I noticed that in the Universal Binary version that all the music files are .ogg files. Will it make a difference if it's an mp3 or an ogg file?

Monkey, I'm just looking for something to really get the vibe of what this mod will be like. From the trailer you posted, I get the impression that it could almost be considered a horror mod, but I don't want to write horror music if it's really not. So, the more I know, the more I can write music that fits well. Or maybe if you can describe to me the feeling you want to experience while playing, that might also be a good way to go.

Anyway, I'm on IRC a lot if you want to chat, or feel free to email me at [email protected]
Top

The basic feel im going for is a very cold, unforgiving, violent rebellion against a tyrant. If you've ever seen the movie deception you know the feeling. Your constantly hidden, and constantly forced to make a stand, all hope is lost, but you keep going, you dont think you'll survive, but thats what keeps you fighting.
Top
Post Reply
51 posts