As a part of some Lugaru modding stuff I'm working on, I am attempting to re-design the old models in Lugaru. Thanks to recent advances in custom Lugaru content (Namely rudel_ic's blender plugins) we should be able to not only import custom meshes, but custom, fully animated character meshes as well, and maybe even custom animations(!). =Edit= word from rudel is that this is not a 'maybe' but a 'definitely'!

Among the first things I've started working on is attempting to re-design the Original Rabbit Model.
For reference here is the original Rabbit model in all its glory: Some things to note about the original model:

• The Model is actually 8 separate meshes, which intersect each other. This is less optimal than having one continuous mesh. Not only this but the Normals of the different parts are often inverted or simply screwed up.
• For some reason the poly-count is twice what it should be. I have attempted to import the model a variety of ways and I always come up with this number for total polycount, though when counting them manually by selecting them I get half the count. This could mean that there are artifact faces, one for each real face. Nonetheless, I am assuming that the engine loads approximately 900 polys, even if not all are drawn.
• The UV mapping is very bad; Often the front as well as the back-side of a body part are mapped onto the same UV area. This not only makes creating skins difficult, but makes the model incompatible with Overgrowth's rendering pipeline, which requires Normal mapping to be 1-to-1 for the shading to look correct.
• I personally feel that the model, with its wide shoulders and broad chest looks a good bit more masculine than feminine. This can make having female characters more difficult, though not impossible.
• The overall look is just boxy and stiff.

With that in mind, my goals were as follows:
• One continuous mesh.
• Staying approximately in the 1,000 poly range. 2,000 would be the absolute max.
• Proper 1-to-1 UV mapping, making the model potentially compatible with Overgrowth's engine.
• Less gender-specific body-shape.
• An updated look.

Before creating a full 3D model I needed to figure out approximately what I want the body to look like. For this purpose I did a rough line drawing to try and figure out the general proportions of the model. Since I liked the result I also colored it:

I've narrowed the shoulders, widened the hips, and posed it a little more naturally.

As you can probably tell, my design was heavily influenced by aubrey's concept work for Overgrowth, specifically the drawing featured in the blog post about female characters in Overgrowth.

I must add that it is going to be awesome, and from what I've seen it looks just like the drawing so far. Great job Jo, you're awesome.
Top

I decided early on that I would not make a high-poly sculpt and then down-sample it (as Aubrey does with Overgrowth assets) but would simply create a low-poly version and be done with it.

The reason is that normally high-poly sculpts can be used to generate high-detail bump/normal data which make the low-poly model appear more detailed, such as with Overgrowth models.

However since this model is intended for the Lugaru engine, which doesn't support Normal maps, all the extra data from a high-poly mesh would just go to waste. Though I could still make use of it by baking the high-poly shadows for the low-poly model, I figured I could probably get comparable results by just drawing the detail shadows of the fur in photoshop once the time comes for texturing.
But back to the model: This gave me a very rough estimate of where the body should be in space.

I started by placing a cube at roughly where the body would be, and slowly subdividing it and moving parts around until you could start to see the torso emerge: I slowly worked my way out from the torso, refining the basic shape more: 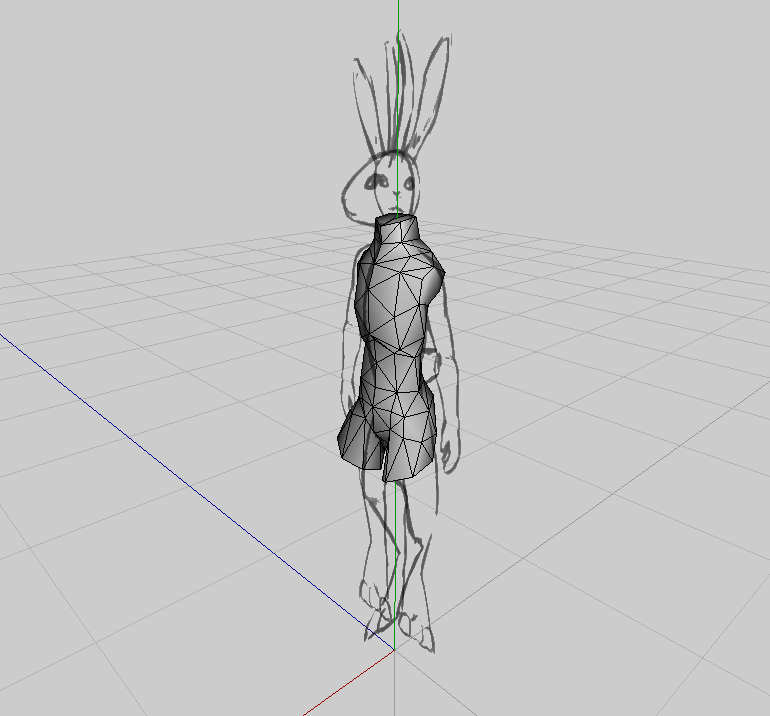 ...working my way to the arms: Polycount at this point was in the 900s with still a good bit of optimization possible, especially in the feet and legs.

Next time: The head!
Top

Wait, you're doing this in Wings!? Damn!
Top

Stromboli wrote:Wait, you're doing this in Wings!? Damn!

But really at this low resolution, all you need is bare-bones polygonal modeling, and for this Wings has everything I need =)
Top

Are you creating a new, more sleek, rabbit model for the game? I am in complete awe and you may have just replaced Lotus Wolf as the best modder here.

Although I suppose rudel_ic has a lot to thank for what you are doing here.
Top

OMG, just found this thread, looks amazing! New models and new animations(i imagine new races, new attacks, and at last Lotus Wolf's weapons could get their own moves), this is going to be crazy!!!
Hyper luck on the project!!!

Thanks for the warm response guys =)

Feel free to critique the design/model if you want. Would be awesome to have some feedback on what I might be able to change.


Aspen wrote:Are you creating a new, more sleek, rabbit model for the game?


Aspen wrote:I am in complete awe and you may have just replaced Lotus Wolf as the best modder here.

Woah, I'm flattered, but Lotus Wolf is real pro dude, with hundreds of custom weapons and already a campaign or two under his belt he's got a-lot on me. It's awesome collaborating with him =)
Not to mention the creators of the other custom campaigns like Jendraz (Empire), Silb (Temple), skraeling (The Seven Tasks), kehaar (Ancestral Tales) deserve to be higher on that list because they've each made amazing complete campaigns.


Aspen wrote:Although I suppose rudel_ic has a lot to thank for what you are doing here.

And yes, without rudel_ic's blender plugin this whole thing probably wouldn't be possible


GreenFlame wrote:New models and new animations(i imagine new races, new attacks, and at last Lotus Wolf's weapons could get their own moves), this is going to be crazy!!!

Yeah, will be pretty awesome once we get this all working. However custom animations are a big maybe at the moment. Really it's up to Rudel_ic there at the moment.

One thing to keep in mind, without the source to Lugaru we will only be able to replace existing animations, just like we can only replace existing models, so that does limit us a little bit.
Top

This is really great! Looks so much better

And that while keeping the overall look of the original models. Good stuff!

By the way, the only significant issue with more polygons is increased loading times in the game; the loading code is non-buffered, it seems. Lugaru _could_ load much faster if that was fixed, and then, something like 8k poly character meshes would be no big deal at all.

I know this because I made a 25k poly character recently by subdiving the stock mesh. And that really just bumped up the load times, performance was nearly identical with 3 characters on screen, as it should be because something like 80k polys is nothing for graphics cards nowadays.

I think the game uses the lowres character mesh for collision detection et cetera. So it's probably really important to keep that one's polycount super-low

BTW, custom animations aren't a maybe. It'll definitely be possible; there's just some stuff at the end of the animations I can't figure out (it ends with some weird bytes followed by weapon orientation vectors), but I'll just copy that stuff and it'll work just fine. Just gotta really write the code, that's all.

Edit: Animations can completely alter the gameplay, balance, timing, overall metaphors et cetera. So although all we can do is replacing existing animations, and they'll only be triggered by the same inputs we know so well, it blows the door wide open for ridiculous stuff that's far beyond what we can do with merely replacing models.
Top

Wow that is looking really great! I can't wait to play Lugaru with high res textures and awesome models!
Top

jo-shadow wrote:
Woah, I'm flattered, but Lotus Wolf is real pro dude, with hundreds of custom weapons and already a campaign or two under his belt he's got a-lot on me. It's awesome collaborating with him =)
Not to mention the creators of the other custom campaigns like Jendraz (Empire), Silb (Temple), skraeling (The Seven Tasks), kehaar (Ancestral Tales) deserve to be higher on that list because they've each made amazing complete campaigns.


Campaigns are amazing, and so are the weapons, but they are things that theoretically even someone as uninitiated as me could do, which strangely enough takes away quite a bit of the awe and wonder of it. However, I am not able to do this, which makes it more impressive in my eyes. Congratulations on your work, and I eagerly await the finished product.

Much, much, much more than eagerly.
Top

I have also just scanned the part about a new upcoming campaign. This bit particularly interests me, especially if it uses this new model (and new animations.)

The one thing we still cannot do, if I am correct, is add completely new animations without replacing an old one. Is that right? If I am correct, I don't think we can add anything new, we can only replace existing objects (except in the line of clothes.)
Top
Post Reply
77 posts