The place to discuss all things Lugaru.
Post Reply
23 posts

Allright. I've put *A LOT* of nerves and work in this, so I hope you like it, and find it useful.

I give you: external dialogue editor for Lugaru. Dedit.

Those big boxes are unknown values (I don't know what they do) please check them out. The one to the left is header of the dialogue (one for all lines) and the right one is footer for each line.

THANKS:
Silb - for the basic info about the dialogue hex format. You saved me few hours!
Lotus Wolf - he told me that windows dialogue editor in debug mode does't work. So I rolled up my sleeves.

Awesome! you turned that out faster than i had imagined! i'll be testing it out.
+10 Awesomeness for you!

Edit: It would be cool if you wrote a tutorial on this, it's kind of hard to jump into.
Top 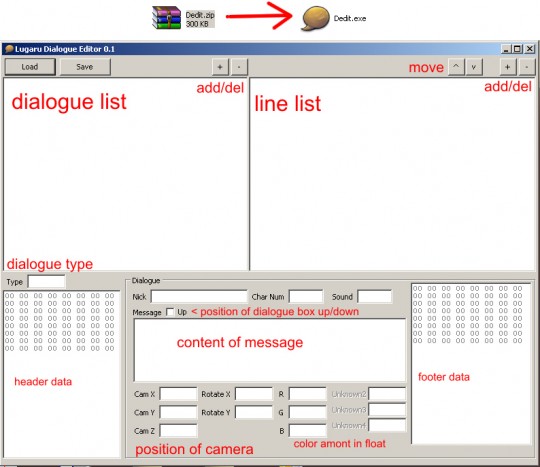 Here's a small dialogue i made to test it out.
The dialogue editing works fine, but camera positioning and rotation is difficult. It works perfectly well for me (Windows XP) and i'm looking forward to updates.

I'll write a tutorial when i get the hang of everything. (hopefully Smok will make camera editing simpler.)

Spoof.zip
Short Spoof i made to demonstrate, and to talk about the editor
(2 KiB) Downloaded 395 times

Oh, that is sweet as. Many, many thanks!
Top

OK, dialogue editing works perfectly, but camera angles are hard. on top of that, in a new map they are nearly impossible, since the camera rests at 0 0 0 and the dialogue could take place anywhere on the map, and there's no way to figure out where. anyway, despite this, i find it truly amazing that you turned this nifty little program out in two days! i'm really looking forward to updates.

Not so hard to find where the camera should be, Lotus. The General Info tab shows the players start coordinates. Set the camera coordinates to those, and with a little trial and error it's not too hard to get your bearings.
Top

If i know where the player is, it's not too hard, but i don't know where he is. General Info tab?

What? please fill me in on that, i may have missed something...

I have a bunch of suggestions for the interface. I'm sure you know about and will fix almost all of these issues, but if there's one improvement I suggest that you haven't thought of, it would help improve the program. Note that I don't actually mod Lugaru myself, and all I know about dialogue editing I learned from reading the wiki page right now. Also, I am trying this program using Darwine on a Mac, so some of these may not apply to the Windows version.
I wonder, would you consider releasing the source of your program? Others could read it and submit improvements to you, or make their own version. I ask because I am presently filled with an urge to make a REALBasic version of this program that would be cross-platform and include the changes I have mentioned in this post. I would probably give up on the project before I made anything useful to others, as I have with other programming projects, but somebody else might have more discipline than me – or might, as I said, just submit their changes to you. I wouldn't mind just doing that if I didn't have a Mac and therefore wasn't unable to edit Windows programs. Of course, you may decide you would rather have the feeling of pride that the program is all your work, and you would rather keep the code to yourself.
Top

roryokane wrote:Allow dragging of lines of dialogue to reorder instead of selecting a line and clicking move buttons

sounds nice, but implementing this would be tough, and it wouldn't be so commonly used.

roryokane wrote: Have color picker instead of or as well as the RGB value text fields

I'll think of that, RGB values differ from float-based, so I'll have to calculate them.

roryokane wrote: Make Sound a menu that includes textual descriptions of sounds instead of text field expecting a number

roryokane wrote: In thanks on General Info tab, spell it Silb instead of Slib

roryokane wrote: Resize window when on General Info tab so there is not huge blank area, or maybe
Bug (probably Darwine only): when switching tabs, the whole window moves down the same distance as the height of the title bar

Not sure what you mean - If you want to enter a line break type \n or \r, it's equivalent for that.

roryokane wrote: Automatically work around 10 or 13 character bug by appending #, without distracting user by showing it to them

roryokane wrote: When truncating message because more than 128 characters, remember all of the message, but put a caution symbol next to the line in the list or color it red, and truncate the message only when saving it to a file. An alert would pop up either right after entering the too-long message or when clicking on the line again or on the caution symbol that would explain that the message is too long.

roryokane wrote: Have tooltip text for most fields, explaining that Cam X means Camera X coordinate, up means the line of dialogue appears at the top of the screen, hostile means whatever it means, etc.

Dedit was dedicated to windows users who are unable to edit dialogs standard way. It's not meant to do everything for them. Little learning (reading wiki and forums) will improve understanding of dialogues and dedit itself. I'm trying to reach fair amount of work between what I've done and what end-user does ;]

Creating Dedit is not so easy as it seems ;P


roryokane wrote:I wonder, would you consider releasing the source of your program?

Not to wider public. Source code is very dirty, and has small comments in Polish, so I'm a little ashamed of it (the way it looks and works). If you will really insist - I'll send you the source, but I urge you to wait until Dedit is finished, and then I'll publish map-file format with comments what each byte does (I'm writing it while discovering).

I'll probalby be finishing this soon, so I can get to work on my Lu campaign. I've made this tool because I needed it. And I'm sharing it because: why not.

hey Danke. I needed this.
Top

This is totally awesome and you are an awesome person for writing this tool.
Top

I'll be writing a tutorial on this soon. Once i figure out a few things about the internal editor.

2)Use Dedit to implement your dialogue. Set everything, other than camera angles. Save it.

4)Position the characters participating in the dialogue where they will be for it, and use the console command "dialogue n Example". (Example must be capitalized, I believe, and 'n' is the dialogue type, all types can be found here.)

6)Load the map in Dedit, and put the dialogues back in over the empty spaces you will find in the "Dialogues" tab.

7)Save the map, and load it in lugaru, the dialogue should appear with the angles you set.

Hope this helps, i might make another spoof map with this tutorial as the dialogue...